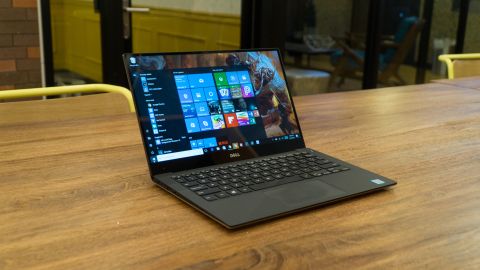 The Dell XPS 13 is like a tortoise surrounded by hares, taking its time in adopting fresh, new tech to deliver an excellent, modern experience that doesn’t leave legacy users behind. Plus, it’s just bloody gorgeous.

The Dell XPS 13 is the epitome of laptops in a way that Apple should be very jealous of right now. For the past few years, it’s been the ‘default’ notebook here at TechRadar, and we promise that it’s not because of popularity and name recognition only. This laptop sets a standard for fast mobile computers that you won’t be embarrassed to carry around in public.

Better yet, the way we look at it – it’s the best laptop to date. In an age when 2-in-1 laptops have begun to emerge and everyone wants their hands on the latest novelty, the Dell XPS 13 2016 is strikingly conservative. Yeah, it feels like a high-end machine, but if you’re looking for groundbreaking, you may be wary that something better will come along.

Inevitably – as new technology develops – that will happen, but the Dell XPS 13 is the safest bet you can bank on. The keyboard is comfy, albeit conventional, the border-less screen is sharp on the high-end and there aren’t any risky design choices that will turn you off. It’s practically the antithesis to the MacBook Pro with Touch Bar in that it has all of its ports and the function keys are all present.

At the same time, the Dell XPS 13 is mighty powerful, and though we’ve yet to get our hands on the latest version, it is available with 8th-generation Intel processors as an option. In fact, there are so many variables with the Dell XPS 13 that it’s tough to generalize. Of course, every model comes with USB ports and an SD card reader, but the guts differ drastically based on how much money you’re willing to spend.

Meanwhile, the UK and Australian versions of the Dell XPS 13 base model come sporting an Intel Core i5 processor – sorry, US readers, it looks like you’ll be given the short end of the stick.

Still, you can always configure your laptop with upgrades and, in classic Dell fashion, there are a multitude of these in tow. You can add a touchscreen, for instance, bearing a 3,200 x 1,800-pixel resolution. However, there’s a steep price difference in doing so, as this Core i5-equipped model also requires that you shell out a grand total of $1,299 (£1,249, AU$2,499).

As of late 2017, there are several configurations you can buy that feature 8th-generation Intel Kaby Lake Refresh processors. These start at $1,299 in the US and go up from there. In the UK and Australia, you can snatch one up for £1,149 and AU$1,999, respectively.

Here is the Dell XPS 13 configuration sent to TechRadar for review:

To be fair, there isn’t a lot to be said of the XPS 13’s design this time around, as very little, if anything, has changed. You still have the 13.3-inch display as sharp as QHD+ (3,200 x 1,800 pixels) with optional touch controls tightly packed within an 11-inch-wide frame.

And, you still have the beautiful, machined aluminum lid and base that beset a comfy, carbon fiber keyboard deck coated in soft-touch paint. Only this time, the lid and base come in rose gold – the salmon shade that’s all the rage in tech products these days – as well as the traditional silver option.

The machine somehow measures even thinner than the previous generation, though only by a hair: 0.33 inches (9mm) at its thinnest point to 0.6 inches (15mm) at its thickest. For those keeping score, the previous model came in at two hundredths of an inch thicker at the nose.

Dell has also lowered the weight of its leading laptop, but by such a small degree it would be impossible to notice: from 2.93 pounds (1.32kg) to now just 2.9 pounds (1.29kg) even for the touchscreen model. Short of a major breakthrough in the materials used to construct the XPS 13, we’re likely looking at the thinnest and lightest Ultrabook from Dell for a while. (Please, prove us wrong.)

All told, we’re still smitten by the XPS 13 design, and frankly we’re happy it hasn’t changed much, because it doesn’t have to. One small request: if Dell could at least center that bottom bezel-oriented webcam like it has on the new Dell XPS 13 2-in-1, that would be clutch.

More ‘pro’ than the MacBook Pro?

During our time with the new XPS 13, we came to a crucial realization: this laptop can match and even surpass the 13-inch MacBook Pro in almost every regard. For 100 bucks less than Apple’s latest laptop, the XPS 13 offers a sharper screen, a stronger processor and the same amount of RAM and storage.

Oh, and this guy has a full-size SD card slot.

The MacBook Pro? You’ll get one more Thunderbolt 3 port – one of which needs to be used for charging – and little else for its starting price. On paper, it seems like the XPS 13 will give you a better time editing photos and video than its archnemesis. Well played, Dell.

Gabe Carey and Nick Pino have also contributed to this review.

Next Page Value, performance and verdict