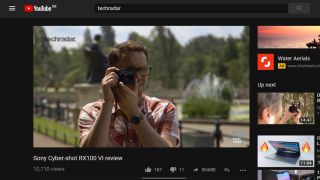 After YouTube introduced a dark mode to its desktop site last year and migrated the feature to iOS in March this year, it’s finally starting to arrive for Android users.

The alternative theme exchanges YouTube’s white backgrounds and menus for a deep grey, aiming to alleviate the eye strain associated with brighter light when viewing in a darker room or at nighttime.

As reported by 9to5google, some users have already begun seeing the change, with the dark theme applied by default when opening their YouTube app for the first time since updating, along with a pop-up offering the option to revert to the regular theme.

You can also enable or disable the mode in the 'General' section of the app’s settings by toggling the aptly-titled 'dark theme' option.

Although not yet available to all Android users, the feature has begun rolling out at random on a trial basis, and we expect it won't be long before it’s widely available.