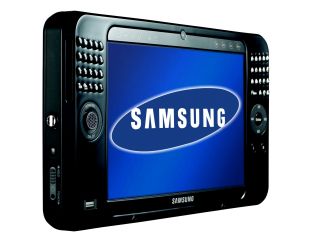 Samsung has refreshed its Ultra Mobile PC (UMPC) and has it on display at CeBIT. The Q1 has now become the Q1 Ultra in what is very much a second generation of the UMPC concept. Straight away you'll notice one key difference over earlier models: a Qwerty keyboard split either side of the screen.

It looks unusable, but we're looking forward to getting our hands on one to see just how easy it is to input a password - we know that typing a story on it will be impossible, so we're aiming low.

The screen is a 7-inch 1,024 x 600 WSVGA display while the device seems to sport a ULV (Ultra Low Voltage) dual-core Intel chip in addition to a 60GB hard drive. Windows Vista Home Premium is the OS of choice, so you even get Media Center.

The Q1 Ultra also packs in other kit, with dual still and video cameras, fingerprint security and GPS navigation. It supports HSDPA broadband over 3G alongside Wi-Fi and Bluetooth.

The original Q1 was first available in May 2006 and was then followed by the Q1 SSD, a version based on Flash memory rather than a hard disk.