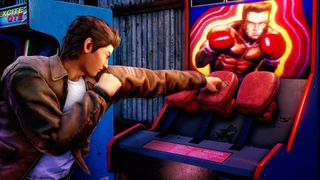 Shenmue 3, one of the most anticipated game franchise revivals of 2019, will launch first on Windows 10 PCs through the Epic Games Store. Publisher Deep Silver revealed the news alongside Epic during the 2019 PC Gaming Show at E3.

Creative head and game director at developer Ys Net Yu Suzuki came on stage during the show to talk up a new trailer, which revealed this dedication to Epic Games's platform. A logo for Valve's Steam platform was not shown during the trailer.

This trailer revealed more key details about what we can expect from the gameplay. It appears that this version of the game will focus much more on martial arts combat than previous entries.

As the game's protagonist, a young Japanese man named Ryo Hazuki in 1980's China, you will study under a new kung fu grandmaster to learn new combat skills at a new school. You will use these skills to both deal with enemies and save innocents in cinematic moments.

It's already known that Shenmue 3 will release on November 19 on both PC and PS4, but it's currently unknown whether the game will at some point release on the Steam store for PC. As of right now, we only know that it's coming for PC through the Epic Games Store. Considering the struggle there's been to get it onto these machines, don't hold your breath for an Xbox Project Scarlett release.