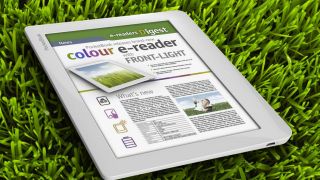 In an effort to get a slight jump on the rest of the ereader competition, PocketBook has unveiled what it's calling the first front-lit, color E Ink device.

Though it's going to be a while before the Kindle Paperwhite or Nook Simple Touch GlowLight have to face PocketBook's device at retail, the unnamed reader does make a compelling case against its contemporaries.

The ereader will feature a 800 x 600 resolution multi-touch screen, which is capable of displaying 4,096 colors.

PocketBook also claimed the ereader will have a one-month battery life, which puts it right on par with other current ereaders.

The lighted display can also be controlled by touching the frame, which should make the ease of adjusting the brightness an easier task for users.

While the seven months between PaperBook's announcement and the estimated release of its nameless ereader gives competitors plenty of time to develop their own comparable devices, for now, PaperBook has seemingly put together an impressive package.

There's no mention of a price just yet, but perhaps PocketBook would be better off conjuring a moniker before it released those details.