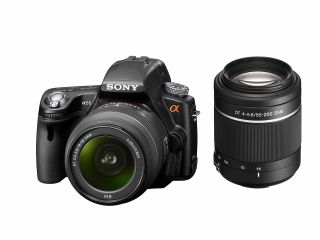 Sony unveiled the latest additions to its Alpha camera range this week - the super-speedy a55 and a33 DSLRs - at an exclusive event with TechRadar in attendance.

The cameras are being billed as the 'fastest DSLRs in the mid-range market' and bring a new piece of optical technology to the sector.

Called Translucent Mirror Technology, the new optical system bring fast autofocusing and it also means that the cameras can now boast of having the fastest high-speed shooting mode around – 10fps on the a55 and 7fps on the a33 when in Continuous Priority AE mode.

Sony is seeing the camera range (and this new-fangled tech) as a real development in the DSLR world with Paul Genge, Technical Marketing Manager, at Sony, saying: "The picture quality from these cameras are better than anything which is on the market, regardless of price."

The a55 and a33 also come equipped with a 3-inch 'Tru-finder' viewfinder, which allows 100 per cent coverage of what you are shooting. It also tilts to 270 degrees, so you can do pretty much any crazy shot you want.

And for the first time on the Alpha range, there is hi-def video on board. This comes in the form of 1920x1080i HD when recorded in AVCHD.

The reason Sony hasn't brought video to the Alpha range before is because the company "doesn't do its R&D in public". This essentially means that Sony has been honing the quality to make sure it is top notch before it comes to market.

Sony is claiming that the video you can shoot looks cinematic – but unless you are George Lucas trying the camera, we're pretty sure that we won't see any of your home videos on the big screen.

There is also an MP4 option but this brings the video quality down to 1440x1080.

As with most of Sony's latest cameras, features include Sweep Panorama mode (which can be done in 3D) and seven scene modes.

Both cameras are fairly compact for DSLRs, with the a55 weighing in a 441g and the a33 just eight grammes lighter.

The a33 and a55 cameras will come as a relief to those who thought Sony was doing away with full-size DSLRs after the launch of its NEX range.

Sony has assured TechRadar that it is in it for the long run with the DSLR and that it is still committed to the format, noting: "We have continued to invest significant R&D resourses. We are innovating and delivering the best possible cameras to two different user groups."

UK release date for the a55 and a33 is September, with pricing still to be announced.