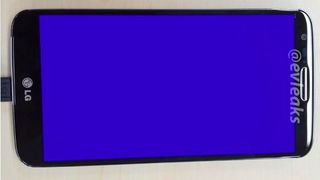 Photos of an unknown LG device have leaked on the web, with speculation suggesting it could be the rumored Google Nexus 5 or LG's own as-yet-unannounced Optimus G2 device.

The photo comes courtesy of prolific mobile leak-artist @evleaks and shows a buttonless smartphone, with a redesigned earpiece and an exceedingly slim bezel.

Not a lot else is known about the device, but with rumors abound that LG and Google are set to team up for another Nexus phone later this year, it wouldn't be a huge surprise if this was it.

The Korean company is also expected to update its Optimus G line later this year.

However, other reports on Friday increased speculation that Google and LG would continue their Nexus partnership with a new handset set to succeed the Nexus 4 in the autumn.

Quite honestly, this could be either device, but it could also be neither. We'll have to wait and see.