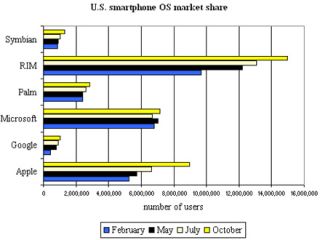 iPhone use charges ahead of Windows Mobile use in US

It seems that the Apple iPhone has overtaken Windows Mobile use in the US for the first time, according to the latest comScore figures.

comScore conducts monthly surveys in the US to measure the total number of smartphones currently in use, so it is about the most accurate metric you can get to show the state of the mobile marketplace at any given time.

You can see comScore's latest data for the three-month period ending in October in the chart right here, which clearly shows iPhone use overtaking WinMo use.

Google's Android OS is also set for a boost early in 2010, what with the rumoured release of the new Google Nexus One phone for January in the US.