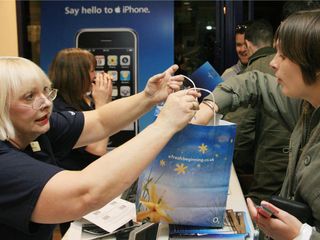 shops even if they don't end up buying the over-priced bauble.

The iPhone 'halo effect' has driven three times as many people through O2's doors as this time last year, reports The Independent. And it's expected to impact Carphone Warehouse positively too, although footfalls numbers have yet to be confirmed.

Of course we still don't know how many £269 iPhones either mobile phone shop has sold - O2 and Carphone Warehouse have to keep schtum thanks to a non-disclosure agreement with Apple.

However both were probably expecting some kind of iPhone update during Apple's launch frenzy at Macworld 2008. Instead they had to console themselves with a 1.1.3 firmware update and the addition of new applications.