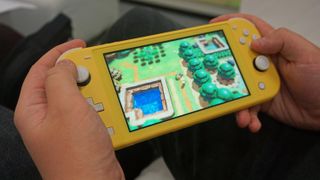 Nintendo's Switch Lite may have only been released less than a fortnight ago, but it appears the company is already prepping an updated model, according to new FCC filing spotted by Digital Trends.

The new filing sports the identification number BKEHDH002 (the original Switch Lite's ID number was BKEHDH001), suggesting a minor update rather than a drastic redesign.

The company's filing for an updated model comes just days after the new handheld was added to a class-action lawsuit, following reports that the Switch Lite suffers from Joy-Con drift – just like the original Nintendo Switch console.

The name 'Joy-Con drift' has been applied to an issue which sees the Switch analog sticks continue to register movement, even when sitting idly in a neutral position.

Originally, the drifting issue was thought to only affect the original Switch console's detachable Joy-Cons, but users are now reporting that the Switch Lite's built-in analog sticks have the same problem.

While the FCC filing doesn't explicitly state that Nintendo is addressing the Joy-Con drift issue, it's hard think of any other reason why the company would be thinking about hardware revisions this soon after the Switch Lite's release.

In the meantime, Switch Lite users affected by Joy-Con drift can opt for one of these matching third party controllers – even if they do lack thumbsticks.