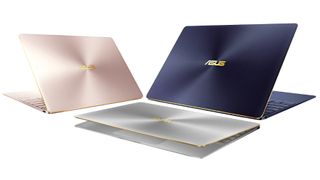 Over at IFA 2016 today, Asus has been busy showing off the ZenBook 3 with an important change to the processor spec, along with a portable, super-thin 15.6-inch full HD monitor – and plenty more besides.

We've already seen the ZenBook 3 of course – in fact we took it for a hands-on spin at the end of May – but at IFA, Asus revealed that it will have the latest Intel Kaby Lake (seventh-generation) processor on board rather than Skylake as was previously mentioned.

You also get four-speaker Harman Kardon audio, and an innovative cooling system to keep those powerful components from overheating – apparently this boasts the world's thinnest fan design (3mm). Battery life is nine hours, with fast-charge tech meaning the notebook can be juiced up from empty to 60% capacity inside 50 minutes.

Get the best Asus Zenbook 3 deals before anyone else!

We'll send you pre-order details and the best Asus Zenbook 3 deals as soon as they're available.

ZenScreen for your laptop, anyone?

If you were after a portable and svelte display to go with your thin laptop, Asus was also showing off the ZenScreen MB16AC which weighs 800g and is 8mm thin – which makes it the world's lightest and slimmest full HD portable monitor, according to the company.

It has a vanishingly small bezel as well, which at 6.5mm is almost two-thirds thinner than previous models, and comes with a hybrid USB-C port which supports power and video, meaning it can be used to hook up to a laptop such as the ZenBook 3 (or any notebook with a USB-C or USB Type-A port).

This 15.6-inch monitor comes with a 1mm thick foldable smart case to provide some protection in transit, which can be used as a stand when you're not travelling.

That sat alongside the Transformer 3 Pro, although this variant isn't getting the Kaby Lake treatment – if you want to know more about the Pro version, check out our full hands-on from Computex 2016 here.

The ZenPad 3S 10 was also present among the IFA goodies, a 9.7-inch tablet with a resolution of 2048 x 1536, and a super-slim design featuring a thickness of 5.8mm – and a bezel thickness of 5.3mm which Asus claims makes this one of the most compact 9.7-inch slates on the market.

This Android tablet is powered by a hexa-core MediaTek 8176 CPU along with 4GB of RAM, and offers up to 64GB of eMMC storage.

A couple more new monitors were also in town, one of which was the Asus Designo Curve MX34VQ , a 34-inch frameless curved monitor with a resolution of 3440 x 1440 (it's a 21:9 ratio display). It also boasts integrated 8W speakers and a Qi wireless charging pad on the stand for juicing up compatible mobiles.

The other monitor was the Designo MX27UC, a 27-inch IPS display with a resolution of 3840 x 2160 and a 100% sRGB wide color gamut. You also get built-in 3W stereo speakers and a USB-C port that supports data/video and power.

Fancy an all-in-one to round the computing products off? Asus had the Vivo AiO V221 at the show, the slimmest model the company has ever produced at 47.5mm thick. It offers four USB 3.0 ports alongside an HDMI connector, and apparently boasts impressive sound courtesy of large front speakers which are driven by smart-amplifier tech. The latter apparently doubles the volume output compared to a normal amp.

Get your game on

On the gaming front, Asus presented its ROG 3DMod custom gaming PC build which shows off the various 3DMod customization options that PCs can be blinged up with.

That includes Aura RGB lighting with nine programmable effects, a 3D printed custom front panel, and 3D printed fan shrouds which don't mess up the airflow – along with a motherboard cover to help keep all those cables neat and tidy inside.

And the company also showed off the ROG XG Station 2 external graphics box which can be hooked up to a laptop in order to provide said notebook with the full power of a desktop Nvidia GeForce GTX or AMD Radeon video card.

While we've seen this teased before, a few more details are available on the enclosure, which connects to the notebook via a Thunderbolt 3 port and will utilize a 600W 80Plus Gold PSU. It will also boast Aura RGB lighting effects and have four USB 3.0 ports on-board, as well as a gigabit Ethernet port.