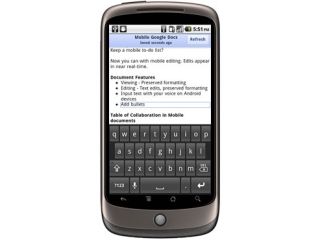 Google has finally announced it is making its Google Docs editing functionality mobile, with the service being offered to those using Android and iOS devices.

The news will be music to the ears of many who use Google Docs on their desktop but are fed up with the fiddly (read: broken) editing offered through handsets.

This new addition is all part of Google upping the real-time ante on its Microsoft Office rival.

Back in April, Google announced that it had rebuilt Google Docs to embrace the cloud and real time.

In reality this meant people viewing the document could see you trying three times to spell the word calender/calendor/calendar and the addition of a new sidebar - so you could see who was editing the document alongside you.

The mobile version of Google Docs editor stems from this and can be turned on by clicking edit and going to the mobile editor.

The service will be rolled out in the next few days and will be available to Android 2.2 and iOS 3 and above users

There's also another twee Google video below to see it in action.