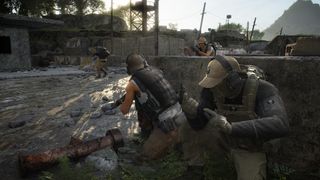 There are a few things that are certain in life: death, taxes and the fact that Ubisoft will continue to release more Tom Clancy titles than we can possibly keep up with.

We got some time with Breakpoint’s 4v4 Ghost War mode at Gamescom 2019 and found that, while it certainly adds more suspense to the usual team death match formula, it doesn’t do much to radically shake up the genre.

The premise of Ghost War is pretty straightforward, lending features from several popular Battle Royales. You go head to head in a squad of four against another team of four, with the aim being to down all the enemies on the other team/get the most kills as a team. Meanwhile, there’s a blue circle moving in which forces you into closer proximity over time - sound familiar?

While there are some obvious traits copied from titles like Apex Legends and Fortnite, the interesting aspect of Ghost War is that there are only two teams facing off, essentially meaning that hiding and waiting till the firefight blows over isn’t really a legitimate option.

In addition, it’s more vital than ever to strategize and communicate with your team - even if you’re not a fan of communication. For example, when we started playing matches, my team did little to communicate vocally but this often meant that several people on the team were picking the same class or being flanked by enemies.

If you don’t want to speak, don’t worry, there’s a handy ping system on hand for you to tag enemies (even when you’re dead and simply spectating).

Speaking of classes, there are four available in Ghost War: Assault, Sharpshooter, Panther and Field Medic. As you would probably expect, Assault is your run-of-the-mill shooter, while Sharpshooter focuses on sniping and Field Medic is the healer of the battlefield. Of none of those take your fancy, then you could make the most of Guerrilla warfare and choose Panther, a stealth-focused class for those who prefer to take out the enemy team quickly and quietly.

Nobody likes a clunky soldier

The smaller teams and closer proximity add an extra layer of suspense that can often be lacking in team death match. Usually it’s a mode of pure chaos in the average FPS but in Ghost War, it takes a bit more patience - or it should.

While this is certainly Ghost War’s biggest strength, the mode also benefits from the fluidity of character movement. As a sniper, I could easily climb to higher heights for the perfect vantage point and smoothly switch between crouching and lying flat as I crawled through the tall grass to take my shot. It’s a small detail, but was vital in removing any potential clunkiness that can often hold FPS titles back.

The dynamic weather and day/night cycle also went far in keeping the matches fresh and creating new obstacles to overcome. It’s hard to snipe on a dark, rainy night.

However, even with these things in mind, it’s not quite enough to make Breakpoint’s PVP mode anything particularly special. We played several matches of Ghost War but after a while things began to get stale. It’s entirely possible that’s because we only experienced a couple of maps which grew tiresome, at launch there will be more - but we don’t expect any game changing additions.

Don't expect a shake up

If you’re someone who is happy with a basic FPS experience with some added suspense and fluidity then it’s probably for you, but don’t go expecting any groundbreaking features.