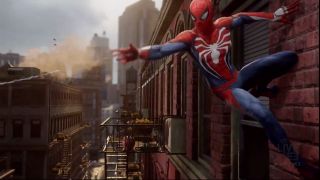 For comic fans, one of the sweetest moments of E3 2016 was the announcement that a new Spider-Man game was coming, and better still that it was being developed by Insomniac Games, developers of Sunset Overdrive, Ratchet & Clank and the Resistance games.

It was a great reveal trailer too. Spidey moves fluidly and the combat looks to make the most of his agility and grace instead of just punching people in the head repeatedly. In particular, the scene where he charges through a crowded coffee shop shows how much work Insomniac have put into the animations and making Spidey look just like he should.

But while the internet rejoiced at the idea of a good Spider-Man game since Spider-Man 2, I had only one thought cross my mind: "Peter Parker, again?".

Peter Parker has been the lead character in all 34 Spider-Man games, and frankly, he's boring by now. If this new Spider-Man game wants to herald a new crop of Marvel universe games, it's going to need to give us something more interesting than another serving of Peter Parker's misplaced angst.

If Marvel comic book games really want to grip the audience again, they'll need to look back at the comics for inspiration.

For a truly good superhero game, it's important that there's a personality beneath the costume. Rocksteady's Batman series works well because even though you're only seeing Mr tall, dark, and scowly in his cowl the whole time, you still get the sense that he's a real person under there, even if that person is all business.

Meanwhile, despite getting the feel of Spider-Man right, and being widely regarded as the best game containing the character, Spider-Man 2's story was as bland as the film it was based on.

Peter Parker was created in 1962, during an era where Stan Lee would would spit out an archetype, give it an alliterative name and, hey presto, a new superhero appears.

His archetype is "slightly whiny teenager" and every four years or so, when his character gets rebooted, we're subjected to his lacklustre origin story once more.

Parker wasn't the only early Marvel superhero without too much else going on. Reed Richards, Scott Summers, Matt Murdoch: all superheroes based on a flat archetype that later found themselves reworked just to be interesting.

You wouldn't realise it from the films and games, but over the last decade Marvel has quietly been making some pretty significant strides forward in terms of diversity and has given us a bunch of new characters and viewpoints in the process.

For the comics giant, it's obvious that the early characters that propelled it to fame just aren't cutting it anymore. Now it feels like it's reinventing itself almost every month with big plot twists, new characters and broken conventions.

If we're about to get a slew of new superhero games then I'll be first in line, but rather than giving us back the tired origin stories and characters we're familiar with, why not play with the new angles that have emerged in the last decade, such as Cyclops' nigh-fascist mutant revolution, Secret Wars' Battleworld, or even the incredibly popular Marvel Zombies universe.

Developers should be using Marvel's masses of history, interesting settings and mountains of characters to build unique stories. Why can't we get Marvel Zombies horror games or a blood-soaked Punisher first-person-shooter?

Let's look at some of the big changes from the last few months: Steve Rogers, everyone's favourite all-American Nazi puncher, has vacated the role of Captain America for Sam Wilson, a superhero from Harlem who trades Steve Roger's powerset of "I'm a goddamn super soldier" for "can fly and has a telepathic link to birds".