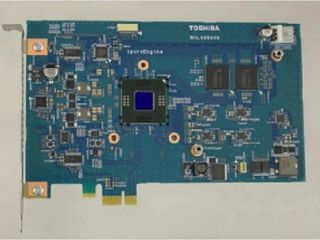 Toshiba is ready to ship samples of the SE1000 SpursEngine

You've heard all about the wonders of the mighty Cell processor that powers the PS3 and high-end industrial computers, so maybe now's the time to get in on the act yourself with Toshiba's Cell-based chipset about to go on sale.

The Tokyo company has announced that it is ready to ship samples of the SE1000 SpursEngine to manufacturers for the bargain price of ¥10,000 (£49) each. Mind you, there's a minimum order of several hundred units to qualify for the development support on offer, so a spot of DIY PC building might prove costly.

Whatever the big PC builders do with the chip is sure to be impressive - demos we saw in Japan last year had a prototype Toshiba laptop upscaling standard video to HD TV and handling complex real-time graphics tasks.

The earlier-than-expected arrival of the SpursEngine promises consumer products powered by its four Cell-derived cores within a year or so. As for Toshiba itself, we're still waiting to hear if it has plans to bring a SpursEngine PC to market.