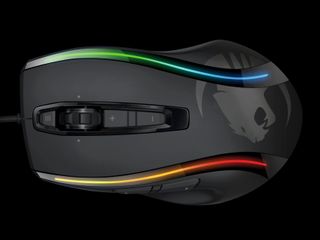 ROCCAT has unveiled the Kone[+] gaming mouse, with a 'revolutionary' 6,000 DPI Pro-Aim sensor.

The ROCCAT Kone[+] max customization gaming mouse boasts a 1,000Hz polling and some nifty tech to pick up what it terms 'lightning fast' mouse movements.

"Thanks to the Tracking & Distance Control Unit (TDCU), which is now integrated in the laser sensor, the ROCCAT Kone[+] can also control lift-off distance as well as fine tune the sensor to suit the mousepad, resulting in optimal tracking," says the German company's release.

The mouse utilises an EasyShift[+] Button, which works a little like a shift key on a keyboard and allows you to trigger different functions with the same buttons.

There is also a button that, when held, switches the mouse to a pre-set DPI – making that tricky sniper shot all the easier.

Last up, ROCCAT has kept its popular 4 multicolour LED system to let your mouse pulsate and embarrass all its less colourful friends.