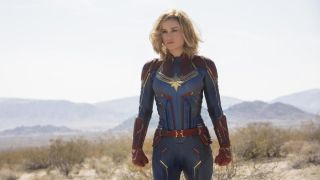 Captain Marvel 2 is being primed for a 2022 release date, according to The Hollywood Reporter. The movie now has a writer, Megan McDonnell, who worked on the first season of upcoming Disney Plus show WandaVision.

The movie will apparently focus on Carol Danvers in the present day rather than the 90s setting of the first movie, which makes sense given that we last saw her appear in Avengers: Endgame.

What's interesting is that the original Captain Marvel writing and directing team of Ryan Fleck and Anna Boden isn't expected to return for the sequel, based on this report. Marvel Studios is apparently seeking a new female director for this sequel. The original directing team may have a Disney Plus project in the works, though.

Disney had three untitled Marvel movies down for a 2022 release as of last May, when it revealed its future slate. One is due for release on February 18, 2022, another is down for May 6 (this was later revealed to be Black Panther 2), while the final one is due for November 5.

THR previously reported that Ant-Man 3 is also targeting a 2022 release date, so that would make Captain Marvel 2 the final Marvel movie due out that year, assuming plans haven't changed in the meantime.

It's worth noting, though, that this latest report simply mentions 2022 as a 'potential' release date.

Marvel's CCO Kevin Feige first mentioned a Captain Marvel sequel at San Diego Comic Con 2019. The first film made over $1.1 billion, making it the ninth highest-grossing Marvel Studios movie so far. While it was a fairly standard superhero origin movie, the novel choice of a 90s setting elevated it, and Brie Larson was a great pick for Carol Danvers.

As one of the few cosmic Marvel superheroes, another trip into the stars would be very welcome in Captain Marvel 2, especially when Guardians of the Galaxy 3 is still years away.

It's unclear whether Captain Marvel slots into Marvel's Phase 4 of projects, or whether it will be held for Phase 5. The last confirmed part of Phase 4 is the Disney Plus series Hawkeye, coming in late 2021. The next Marvel movie is Black Widow, out in May.