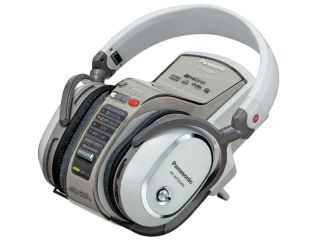 Panasonic's wireless headphones have big claims to live up to.

If you really want to call Panasonic's bluff about its new wireless headphones being able to replicate room-filling 5.1-channel surround sound inside your own head, then feel free to plonk down the ¥20,000 (£83) they'll cost when released in Japan next month.

For what it's worth, the RP-WF5500 'phones are available in either black or white and use the 2.4GHz slice of the electromagnetic spectrum to keep in touch with their supplied base station for up to six hours on a single battery charge.

The range of 30m is pretty standard, but at least line of sight isn't required to be maintained, unlike older, infrared-based wireless headphones, which were quite the nuisance. Panasonic claims its technology can simulate 5.1 Dolby Digital using DTS and AAC and that it even has an effective bass booster.

At 255g, the WF5500 isn't a light set of headphones, but it does include more technology than most - assuming all those acronyms and proud claims actually count for something outside Panasonic's R&D labs. If you do end up impressed, an extra ¥10,000 will secure a second set of the headphones without the base station.