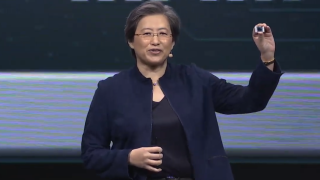 It's not been long since AMD revealed its Ryzen 4000 processors for laptops at CES 2020, and while Team Red has made huge promises about their performance, we're starting to see some leaks that really put things into perspective.

Renowned leaker TUM_APISAK leaked out some 3DMark Physics scores on Twitter, and if they're any indication, AMD Ryzen 4000 mobile chips really won't be much slower than the best processors for desktop PCs.

Typically, 3DMark is a program that's meant to test graphics and gaming performance, but each of the preset tests (like Sky Diver, Fire Strike, Time Spy etc) have a physics test that put the processor to the test. The rest of each run of 3DMark is relatively unimportant when it comes to measuring the strength of a processor.

Which is why, when the Ryzen 7 4800H comes within 14% of the performance of the desktop-class Ryzen 7 3700X, it's kind of a big deal. What's actually more impressive than the 45W chip being that close to the 65W 3700X is the Ryzen 7 4800U's performance. That chip, designed for the thinnest and lightest laptops is just 33% slower than the 3700X, and that's with potentially 77% less power than the desktop chip guzzles.

Still, it's important to note that these are leaked benchmarks, so we should take them with a massive grain of salt. Still, AMD claimed that the Ryzen 7 4800H is faster than the Intel Core i7-9700K, and if these leaks are any indication, it might actually be true. Luckily, because these processors will find their way into laptops in the next couple of months, we won't have to wait long to see if these claims hold water.