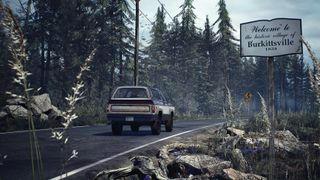 In 1999 The Blair Witch Project was released in cinemas and immediately became a cult horror classic, causing film goers to vomit and creating an urban myth that still lives on today.

I vividly remember the first time I watched The Blair Witch Project, years after its original release. I must have been about 16 at the time and full of that cocky teenage confidence that teens tend to ooze when it comes to horror films. How wrong I was.

I have never been as unsettled by a scene as I was when those camera-wielding campers wandered into that witch's house, with its devil scratchings and wooden stick men.

It's now 20 years later and I am revisiting that house once more, but this time in the Blair Witch game. It's me who is in control of the camcorder – and it is horrific.

I feel like it's worth mentioning at this point that I do not like horror games. Not that I don't appreciate them, and as TechRadar's dedicated gaming writer it is my duty to dabble in all games. That being said, I feel like if I wanted my heart to beat out of my chest then I would rather rig myself up to a defibrillator instead.

So when I agreed to play the upcoming Blair Witch at Gamescom 2019, I hadn't really taken the logistics into account. It's only when I stepped into the infamous woods, that the reality of the situation set in. This wasn't going to be a leisurely walk in the forest.

Bloober Team's Blair Witch isn't a game adaption of the films – rather it is a game with a new story inspired by the film lore. You play as Ellis, a cop who (accompanied by his K9 dog pal Bullet) is searching the woods for a young boy who has gone missing. But it's those woods and the witch isn't going to make it easy for you.

Perhaps the most stressful part of Blair Witch is that it isn't a combat game. Instead, Bullet will alert you to the presence of something evil either through barking or growling. The only way to fend off the evil that creeps up on you is by shining your flashlight (or camcorder light) at them. But the minute that dog barked, my stomach sank.

As much as I hated Bullet's growl, it was preferably to no Bullet at all. At several points our canine companion disappeared, resulting in a resounding screech of "where's the dog?!" to no one in particular. There was one particular point where I was exploring some caverns below a tree and suddenly got a nauseous feeling when the flashlight went out and the witch started whispering in my ear. Maybe the growing wasn't so bad?

The house from hell

I played five chapters of Blair Witch during the demo, each from a particular section of the game. But the final one is where I lost what little dignity I had: when I returned to the house that terrified me as a teen. The house that sees stick man etchings covering the walls and where baseballs randomly roll down the stairs.

I remind you at this point. No combat. None. Bullet is gone and I am armed with a camcorder that I'm forced to look through to find hidden features which look a lot like blood smears. I've got to get through the house, with its tight corridors and hidden blood trails: I'm being forced to search which means looking at the screen (something I had been pretty lax about until now).

At one point an entity of some sort jumped out from behind a door and I jumped so high that my headset fell off and the journalist to my right recoiled in horror. "I only need to get through this last chapter," I muttered to myself as I proceeded with one eye open and the other closed – my bulletproof tactic for horror games. Or it was, until the journalist to my left caught on to my tactic and proceeded to laugh at my cowardliness (they later ratted on me to the PR... snitch).

Essentially, Blair Witch relies on the same horror that the films do. Rather than focusing on gore and visual horror, the developers focus on what you don't see. Which is actually more terrifying.

Throw in some jump scares, a detail-rich environment and you have a solid horror game with a niche 90s spin. However, there are definitely aspects of Blair Witch that could use some polishing as sometimes the real horror was how Bullet could walk through trees...