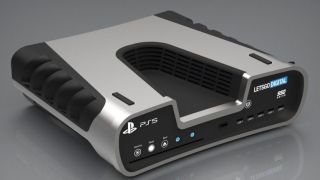 There's been an abundance of leaked PS5 dev kit images swirling around the internet in recent months, clarifying that the next-gen console is out in the wild and being utilized by developers.

However, there's something a bit odd about the PS5 images that we've been seeing. They don't quite look in line with Sony's previous PlayStation consoles, in terms of design. In fact, the bulky, V-shaped box is almost alien-like in its appearance.

This has led us to believe that the PS5 dev kit we're seeing images of, is not the final PS5 design we'll be seeing come the console's launch in late 2020. This is usually the case when it comes to console dev kits: the final product doesn't quite look like the leaked images we see before release.

Want proof? We've rounded up images of some key PlayStation dev kits, and the final launched product, so we can assess the key changes in design and how Sony is maybe going about things differently with the PlayStation 5.

Often the original PlayStation's dev kit is credited as being the blue version of the console. It was, but it was one of several. There were actually several PlayStation dev kits created, with the blue version's purpose being for debugging near the final stages of development.

But we're going to focus on the original PlayStation prototype: the MW.3. We know that this prototype isn't technically a dev kit (as its hardware differed from the final console's release), but it was sent out to a few developers. Although, these were mostly first-party developers like SN Systems.

The reason we're focusing on the MW.3? It somewhat resembles the images of the PS5 dev kit that have been circulated and we think that this showcases just how much the design of a console can change.

Quite clearly the MW.3 box looks nothing like the PlayStation that launched. It's big, bulky, with a little screen and a few ports on the front, similar to the PS5 dev kit images we've seen floating about.

The PlayStation that launched was much smaller, flatter and had a totally different design.

The PlayStation 2 dev kit was a chonky machine. It essentially looked like a PS2 Slim stacked on top of a PS2, but the design itself wasn't too far off the final product - much like the blue version of the original PlayStation.

The PlayStation 2 that actually released in 2000 was considerably slimmer, but the design was pretty much the same as the dev kit - except streamlined a little more. It was arguably the PlayStation dev kit that looked closest to the launched console.

The PlayStation 3 is probably the PlayStation console that's design changed the most from its dev kit. The PS3 dev kit looked like VCR: a large black box with lots of ports, buttons and two HDDs (one for the operating system and the other for Blu-ray).

We now know that the PlayStation 3 console that released in 2006 looked absolutely nothing like this. Sure, much of the hardware was the same (with some omissions) but, in terms of design, the PS3 was much sleeker - sporting a more futuristic look than we had seen in PlayStation consoles before.

The multitude of buttons and ports were streamlined down while, understandably, the HDD was tucked away behind the casing. We're hoping the PS5 represents a similar difference between dev kit and slicker, finished machine.

We've no doubt that Sony has got the PS5 design decided upon and, alongside practicality issues, it may be the gaming monolith is waiting as long as possible to disclose the console's final look out of fear of modern leak culture.

Finally we come to Sony's most recent PlayStation console (excluding the PS4 Pro), the PlayStation 4.

Like with the PS3, there's a big difference in terms of design between the PS4 dev kit and the final PS4 product, released in 2013.

It seems the company has moved away from releasing dev kits which strongly resemble the final console. Whether that's to give developers more time to work on more hardware-intensive games, to prevent design leaks, or simply a case of not having the final design complete yet, is up for debate, but our guess is it's a mixture of all of the above alongside cost.

The differences between the PS4 dev kit and the released console are pretty obvious. For one, like many of the other dev kits on this list, this one is a massive machine reminiscent of the original Xbox or a heavy-duty briefcase.

At the front there's a disc drive and some buttons and ports, which were eventually lessened with the console's final release. The PS4 was much less military-looking, and considerably smaller, as if someone had sawed down the edges of the dev kit to unearth a tidier alternative.

But there's no way that looking at that dev kit that we could have imagined what Sony had planned for the released console.

Which brings us onto the PlayStation 5. Again, this dev kit is burly and very alien-looking, and even sports a V-shaped design - no doubt to mark the '5' in PS5.

However, as history has proven, released consoles very rarely look anything like their dev kits. Dev kits are built for testing so they need to be robust and perform as the final console would (in most cases), but there's no need for them to look like the final iteration.

We're still nearly a year away from launch, so it's possible Sony is still polishing off the design and final features of its next-generation console. Finally, Sony will be wary of leaks - just look how many times the PS5 dev kit has been shown on the internet. It's a smart move to hold off on any sort of design reveal for now.

So, what we're saying is that you shouldn't expect the PS5 to look like the dev kit images. It may share some elements, but we're expecting something that's otherwise very different, that you can imagine sitting under your TV for the next five years.