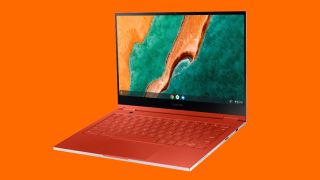 The Samsung Galaxy Chromebook has been announced at CES 2020, the huge technology event that’s currently happening in Las Vegas.

Chromebooks are laptops that run the lightweight Chrome OS operating system (rather than Windows 10). They are usually affordable, no-frills devices, which makes them a popular, if rather unglamorous, choice – especially in the education sector.

Few companies apart from Google produce premium Chromebooks, but the Galaxy Chromebook is a stylish and desirable laptop that's designed to take on the Google Pixelbook Go, which is our current pick for the best Chromebook ever made.

High specifications for a Chromebook

Due to their affordable nature, Chromebooks usually come with quite low specs – which are still enough to run the lightweight Chrome OS.

However, the Samsung Galaxy Chromebook features some impressive hardware, including a 13.3-inch 4K display, and a “processor that can handle everyday projects” according to Samsung. We’re following up to find out more information about the exact hardware the Galaxy Chromebook uses.

It’s also apparently the thinnest Chromebook Samsung has made, so we’re expecting an impressively slim and light device when we get our hands on one – which hopefully shouldn’t be too long.

Once we find out more details – including specs, price and release date – we’ll let you know.