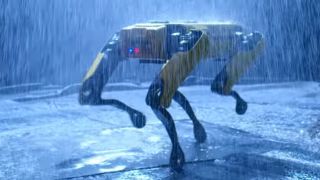 Boston Dynamics' nimble quadruped robot Spot is now available to lease as part of an early adopter program, and it's already strutting its stuff in a handful of forward-thinking workplaces.

Boston Dynamics hasn't revealed exactly how much it will cost to buy your very own robo-dog when it goes on sale, but according to TechCrunch, the price will be comparable to that of a car.

For that, you'll get a seriously powerful bot that's small enough to work in spaces designed for people, but able to cope with rough terrain, steps and obstacles that would send wheeled robots sprawling.

It has 360-degree vision thanks to its stereo camera system, helping it avoid crashing into people and objects, and can right itself automatically if it takes a spill.

Spot can carry loads up to 14kg across these perilous paths (far more than an aerial drone), and back in April, Boston Dynamics demonstrated its pulling power by harnessing up a pack of 10 Spots to tow a truck across the company's parking lot.

That stunt wasn't just good PR; it also showed Spot's potential for pulling vehicles out of treacherous locations where it wouldn't be possible to use a conventional tow truck.

That's not all it can do, though – Spot isn't a single-use bot, but a whole platform, with a software development kit for programming it however its owners see fit. Its hardware, meanwhile, can be customized with additional sensors, power packs, and an arm attachment for opening doors and carrying objects. Check out the video below to see more of its capabilities.

Spot is already hard at work, but it's still playtime for Boston Dynamics' bipedal robot Atlas. The robot has already been filmed performing parkour-style jumps, and now its creators have released a new video of it performing a gymnastics floor routine.

Although it can't complete the sequence of jumps and rolls perfectly every time, Boston Dynamics says Atlas is now able to finish without fumbling 80% of the time. Perhaps it will soon be ready to enter the workforce too.