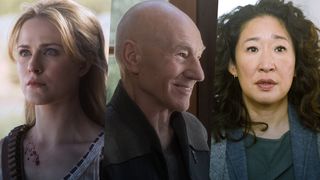 When counting down our list of 2019's best TV shows, we discovered two things. Yes, there are too many good shows for most normal people to fit into their precious spare time now, especially with more and more TV streaming services landing. Despite that, though, the number of truly great shows is a lot smaller. If you're smart with your viewing choices, you don't have to feel behind when you watch TV in 2020.

To help you figure out what to watch in 2020, we've put together a list of the best new TV shows coming your way this year, and we'll keep updating this page as new and exciting shows are confirmed for this year. We've also thrown in a number of returning favorites that you'll want to check out.

Where to watch it: CBS All Access (US), Amazon Prime Video (everywhere else)
Release date: January 23

18 years after his last Starfleet command in Star Trek: Nemesis, Patrick Stewart reclaims the role that made him an icon. Famously protective of the character, Stewart was wooed by a pitch that sees an older, guilt-haunted Picard break out of retirement on a galaxy-spanning mercy mission. Look for some familiar 24th Century faces, including Brent Spiner's manchild android Data and Jeri Ryan as Seven of Nine.

There's some serious creative firepower behind this new HBO series - the executive producers are geek overlords Jordan Peele (Get Out, Us) and JJ Abrams (Star Wars, Lost). It's the story of Korean war veteran Atticus Black as he travels across 1950s America, encountering cosmic monstrosities torn from the cracked imagination of horror writer HP Lovecraft as well as the true life terrors of racism. It promises to be one hell of a road trip.

The Falcon and the Winter Soldier

Where to watch it: Disney Plus
Release date: Fall 2020

Marvel makes a fresh stab at conquering TV with this direct tie-in to its big screen universe, the first of a whole squad of superpowered shows coming to Disney Plus over the next couple of years. Sam Wilson (Anthony Mackie) and Bucky Barnes (Sebastian Stan) reunite in a post-Blip world, facing the threat of Civil War's Zemo and John Walker AKA US Agent, a brutal uber-patriot sanctioned by the government as a replacement for Captain America.

Where to watch it: Amazon Prime Video
Release date: February 21

"This is not a murder. This is a Mitzvah..." The mighty Al Pacino has his first starring role on TV in this ten-part Amazon Original. Set against the grimly atmospheric backdrop of 1970s New York, the series follows a group of Nazi hunters battling a genocidal conspiracy to create a Fourth Reich in America. Expect a bloody blend of ‘70s cinematic touchstones Marathon Man and The Odessa File with a distinct crackle of 21st Century topicality.

The work of Stephen King continues to fuel our screen nightmares. Here's an adaptation of his 2018 novel, a bone-chilling paranormal spin on the standard police procedural. Rogue One's Ben Mendelsohn stars as Oklahoma cop Ralph Anderson, teamed with Cynthia Erivo as private investigator Holly Gibney. Faith and reason clash, Mulder and Scully style, as they hunt the truth behind the grisly murder of a local child.

The Walking Dead: World Beyond

Where to watch it: AMC (US), TBA (International)
Release date: TBA

There's a surprising amount of mileage in a post-zombie world. On the shambling, decaying heels of Fear The Walking Dead comes yet another spin-off based on Robert Kirkman's graphic novels. This one's set a decade after the original apocalypse and focuses on the next generation of survivors, the first to come of age on this nightmarish new Earth. Key to the story is ruthless paramilitaristic organisation CRM, who whisked Rick Grimes away in The Walking Dead season nine.

Where to watch it: Netflix
Release date: February 7

Hulu and Fox both took a shot at adapting the magic-soaked comic book by Joe Hill and Gabriel Rodriguez but it took Netflix to finally bring it to the screen. Third time's clearly the charm, or possibly the curse, given it's about three siblings discovering that their ancestral home in Massachusetts is a demon-haunted portal to extra-dimensional weirdness. Hill, for one, approves: "It's super Netflixy, in the very best, kiss-your-weekend goodbye kind of way," is how he described it at last year's San Diego Comic Con.

Where to watch it: Disney Plus
Release date: Late 2020

This MCU series will blend a classic sitcom style with the large-scale action that's now a trademark of the Marvel movies, which is an inventive combination. Elizabeth Olsen reprises her role as Wanda Maximoff, and Paul Bettany returns as The Vision, despite his dramatic death at the hands of Thanos in Avengers: Infinity War. This is perhaps the most intriguing of the upcoming Marvel shows on Disney Plus, bringing back characters from the movies' past like Darcy from the Thor movies (Kat Dennings) and Agent Jimmy Woo from Ant-Man and the Wasp (Randall Park). How is Vision still alive in this show? That's the main mystery to be unlocked, here.

Netflix continues to champion global drama. Here's a Brazilian chiller-thriller that aims to splice authentic South American folklore with a pinch of Japanese ghost story. Quite the multi-cultural horror cocktail. Set in São Paulo it finds a group of modern day teens facing vengeful spirits spawned by events in the city a century ago. The showrunner of Spectros is Doug Petrie, no stranger to teenagers and the supernatural given his stint on Buffy The Vampire Slayer.

Every good villain deserves an explanation. Here's one for Nurse Mildred Ratched, sadistic antagonist of One Flew Over The Cuckoo's Nest. Created by American Horror Story's Ryan Murphy, this new Netflix show begins in 1947, charting the career journey that made her the authority figure of your nightmares. Louise Fletcher played Ratched in the 1975 movie – now Sarah Paulson follows that Oscar-winning turn, in a series she told THR is "complicated and dark… and totally terrifying."

Where to watch it: HBO (US), Sky/NowTV (UK)
Release date: TBA

There's a tantalizing whiff of The Wicker Man about this mysterious new drama from Dennis Kelly, creator of conspiracy thriller Utopia. Set on a remote island off the coast of Britain, it's split into two parts over six episodes – Summer and Winter – as Jude Law and Naomie Harris encounter a local population intent on preserving the old ways… This unhelpful contribution to the UK's rural tourism industry comes courtesy of HBO and Sky.

Netflix established a street-level Marvel universe with such shows as Daredevil and Jessica Jones. Now that deal has expired – did Thanos snap his fingers in a Hollywood boardroom? – the streaming giant has turned to comic king Mark Millar for a fresh injection of imagination. This is the first Netflix/Millarworld collaboration, a dynastic tale of superheroes that sees a new generation of capes fight to escape the shadow of their legendary predecessors.

"If I look at the present, I lose my sense of humor," writer Armando Iannucci told NME about his newest creation. Iannucci skewered modern politics with shows like Veep and The Thick Of It. Now he's fled contemporary Earth for the near-future, bringing Hugh Laurie with him as Ryan Clark, outwardly suave captain of tourist starship Avenue 5, a man only ever a parsec away from crisis. Expect sly commentary on 2020 among the planet-cruising laughs – we hear Black Mirror's an influence…

The Haunting of Bly Manor

How do you follow a genuinely nerve-twisting viewing experience like The Haunting of Hill House? With another piece of paranormal real estate, naturally. Evolving into a property-themed anthology show, the second season takes on the gothic horror of Henry James's classic novel The Turn Of The Screw, the tale of a governess, two deeply spooky kids and a home filled with unspeakable dread. The Hill House cast returns, now playing new characters.

Where to watch it: Disney Plus
Release date: Fall 2020

The first live-action Star Wars TV series returns for a second season in fall 2020. Spoilers if you haven't seen the season one finale, but this new season is likely to focus on the search for Baby Yoda's home planet, as teased extensively in the closing moments of Chapter 8. Maybe we'll finally learn the name of Yoda's species this year. Or, maybe this is just a fun framework for some more high-grade and stylish Star Wars TV adventures from talented directors, which suits us fine.

Where to watch it: BBC (UK), BBC America (US)
Release date: 1 January

Jodie Whittaker is back as television's time-traveling hero. Expect a bigger, more confident run of adventures, which kicked off on New Year's Day with Bond-inspired two-parter Spyfall, pitting Time Lord and friends against a planet-threatening conspiracy – and found room for guest stars like Lenny Henry and Stephen Fry too. Returning adversaries include judicial space rhinos the Judoon and some creepily rusted Cybermen.

Where to watch it: Amazon Prime Video
Release date: Summer 2020

Once again poking the diseased underbelly of superheroics, Amazon promises a second serving of blood, F-bombs and ultra-violence. Karl Urban's back as Billy Butcher, leading a team of vigilantes determined to keep the spandex wonders in check. Aya Cash joins the cast as Stormfront, gender-flipped from the comic books but still packing the power of electrokinesis, and we're promised more of Breaking Bad's Giancarlo Esposito as Vought conglomerate CEO Mr Edgar.

Where to watch it: CBS All Access (US), Netflix (International)
Release date: TBA

Where to watch it: BBC America (US), BBC (UK)
Release date: Spring

The cliffhanger that closed season two threatened to finally make good on the show's title but Killing Eve has always traded in get-out-of-that. Inheriting TV's greatest game of consequences is new showrunner Suzanne Heathcote, continuing the deadly dance between Sandra Oh's Eve Polastri and Judie Comer as Villanelle, the most insanely watchable psychopath in history. Brace yourselves for another intoxicating collision of haute couture, sapphic tension and filthy murder.

Where to watch it: HBO (US), Sky/NowTV (UK)
Release date: TBA

HBO is keeping plot details under wraps for the third season of the android-heavy sci-fi series, revealing only that this set of episodes will feature (spoiler alert!) Dolores and Bernard's life away from the park. It's also getting an extra injection of star power, with Breaking Bad's Aaron Paul and Black Swan's Vincent Cassel joining the ensemble.

We know a few shows are likely to release in 2021, rather than this year. Joss Whedon's first original show in over a decade, Victorian horror series The Nevers, comes to HBO in 2021. Likewise, HBO's Game of Thrones prequel House of the Dragon is unlikely to release in 2020, and has a long path to being ready. There's no release date for Amazon Prime's The Lord of the Rings TV series, but it has a target date of 2021. Also on the fantasy front is a second season of The Witcher, starring Henry Cavill. That could debut in either 2020 or 2021.

Disney Plus has announced a lot of live-action shows based on its Marvel and Star Wars properties. On the superhero side, expect Loki starring Tom Hiddleston and Hawkeye starring Jeremy Renner in spring 2021 and fall 2021 respectively. It's unclear when Marvel's Moon Knight, Ms Marvel and She-Hulk series will air, but it'll either be in 2020 or 2021. Marvel also has animated series What If? in the works, which features MCU actors reprising their roles in alternate universe scenarios.

Expect 2021 to also bring the Obi-Wan spin-off to Disney Plus, starring Ewan McGregor. And who knows, maybe Lucasfilm has other projects in the works for Disney Plus we don't know about yet.