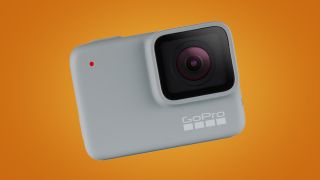 Over the past 15 years, GoPro has become a byword for action cameras. And rightly so – its Hero flagships are so polished and feature-rich, they make many rivals look like cheap imitators. But what about GoPro's own budget models, like the Hero 7 White? Does this stripped down version still have the sparkle and performance that makes other GoPros such a popular choice for travelers and extreme YouTubers?

These are the questions we'll be answering here using our expert knowledge of GoPro's range. With the remaining stock of the now discontinued Hero 7 White likely to be heavily discounted in the Black Friday 2019 and Cyber Monday sales, it's a good time to consider what was already the most affordable GoPro ever. And despite its lowly, entry-level status and recent culling from GoPro's lineup, it's still well worth considering if you're looking for a tough, affordable waterproof camera – here's why.

The bottom line: For beginners who just want a point-and-shoot action camera with few frills, the Hero 7 White offers very good value. It can’t shoot 4K video, but offers the same waterproofing and usability as more expensive GoPros, for a fraction of the price.

Pros: Unlike most budget action cameras, the Hero 7 White’s 1080p video is stabilized and easy to edit in GoPro’s smartphone app. The camera is also waterproof to ten meters without the need for a case, while GoPro’s polished interface makes it both suitable for beginners and fun to use.

Cons: It can’t shoot 4K video, which most smartphones can now manage with ease. Also, unlike GoPro’s flagship models, the Hero 7 White’s battery isn't removable, so you can’t carry spares and swap in fully charged ones. It also lacks the latest features like HyperSmooth stabilization and TimeWarp timelapses.

GoPro Hero 7 White: Everything you need to know

It was only introduced in 2018, but the Hero 7 White has now been discontinued after GoPro revamped its action cam lineup in September of this year. At the time of its launch, it was the cheapest GoPro available and sat below the Hero 7 Silver and Hero 7 Black, both of which remain on sale.

Still, the brevity of the Hero 7 White's stay in GoPro’s lineup doesn’t mean it isn’t worth considering. Aside from the lack of 4K video, it’s a polished, beginner-friendly action camera that benefits from GoPro’s slick software and waterproof design.

Design: The GoPro Hero 7 White’s waterproofing is rated at 10 ATM, which means you can shoot video while snorkeling or swimming without needing a case. Impressively, that’s the same water-resistance rating as GoPro’s flagship models. While you sadly can’t remove the battery and swap in a fresh one, it is also possible to charge it up with an external battery via its USB-C port, which is handy if you’re out base jumping without easy access to the mains.

Features: The Hero 7 White is quite basic compared to the shiny features available on GoPro’s more expensive models. But is still more versatile and polished than most budget action cameras that you’ll find on Amazon. Compared to the last year's flagship Hero 7 Black, the main features it lacks are HyperSmooth video stabilization, TimeWarp timelapses, live-streaming and GPS. But it does still have decent electronic stabilization, slo-mo video and, importantly for beginners, compatibility with GoPro’s smartphone app. This includes features like QuikStories, which automatically edits together clips from your days out into a souvenir video.

Video and stills: The headline feature missing from the Hero 7 White is 4K video. If your video ambitions end at social media and YouTube, this isn’t necessarily a problem – it’s better to have good quality 1080p video than shoddy 4K, which isn’t uncommon on budget action cameras. Unlike other GoPro cameras, though, you can't change the Hero 7 White's field of view, which means you can only shoot with the trademark fisheye look.

The conclusion: The GoPro Hero 7 White is one of the best budget action cameras you can buy, particularly if you can snap up one of the likely Black Friday or Cyber Monday discounts. It might not be able shoot in 4K, but in every other sense it's ideal for the beginner who just wants to press one button and shoot social media-friendly video.