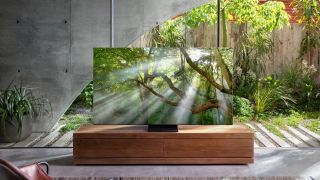 At a CES 2020 expo full of the major players in the TV market, Samsung managed to keep our attention just for being willing to show off a lot of tech, whether brand new concepts or iterations on existing ones.

We had the near-invisible bezel and fascinating speaker system of the Samsung Q950TS 8K QLED, the swinging form factor of the TikTok-ready Samsung Sero, and even new models for the updated The Frame TV – which now comes in so many sizes that it’s hard to keep track.

There certainly wasn’t a shortage of Samsung this year, then, which is why we’ve brought together every new Samsung TV for 2020 that’s been announced so far. As the world’s biggest seller of televisions, there was always going to be a lot of ground to cover, and this is where it starts.

We’ve only really got firm details on these higher-end TVs, though we’ll be updating this Samsung TV 2020 guide as we learn about more models, and get official confirmation of release dates, pricing, and the like. Scroll on down for what to expect in terms of software and specs, with 2020 and 2019 televisions listed below that.

Samsung Q950TS 8K AI QLED (available in 65, 75, 85 inches): There’s only one of the three 2020 QLEDs revealed so far, and it’s a real beauty. The Q950TS has a near-invisible bezel for an expansive 99% screen design, and top-of-the-range AI processing, as well as an innovative OTS+ surround sound speaker system built into the frame of the television. HDR10+ is a given too. If you want an 8K TV this year, and cash is no issue, this is likely the set you want.

Find out why we're excited in this hands-on Samsung Q950TS 8K QLED review.

Samsung Sero TV (available in 47 inches): The Sero TV has a neat gimmick, being able to rotate 90 degrees to show mobile videos and photos in portrait mode. As an added bonus, anyone with the Samsung Note 10 can do so simply by connecting their handset and rotating it in their hand. Now that’s synergy!

It’s clearly aimed at Tik-Tok and Instagram users, though its niche target audience and approximate $1,600 / £1,230 / AU$2,300 price tag – we know for sure it's coming to UK and UK, with Australia being uncertain – will likely keep it out of the hands of most.

Check out our hands on Samsung Sero TV review for more on the new set.

Samsung The Frame TV (now available in 48, 75 inches): The Frame TV already exists, as a great-looking lifestyle model for those wanting to give their television a real touch of class – even if it’s at the expense of other areas. The Frame line got upgraded with a QLED panel in 2019, and 2020 will see it get a new ultra-small 32-inch size and larger-than-ever 75-inch size too.

Check out our take in this hands on Samsung The Frame review.

Eyeing up a Samsung TV in 2020? As the largest TV manufacturer in the world, with near enough a third of the global market under its belt, you're not the only one.

It's the 8K QLED ranges that are now getting the most attention, though, with Samsung working every year to improve its upscaling from lower-resolution sources, while angling its 1,500-2,000 nits (i.e. very bright) displays as a superior technology to the OLED panels used by much of the competition.

Samsung has been a leading voice in the push for 8K panel technologies, and is continuing that tradition with three new 8K models for 2020, of which only the Q950TS has been officially named – while also bringing 8K HDR10+ exclusively to these televisions.

HDR10+ is Samsung's open-source answer to Dolby Vision, the dynamic 4K HDR format for visually enhanced televisions shows and films. It's not quite as widespread as the Dolby version, but it is supported by Amazon Prime Video, in case that's your primary TV streaming service.

Last year's most notable improvement was Samsung's new ‘Ultra Viewing Angle’ technology, reworking the backlight to ensure improved contrast and color accuracy even at tighter angles – a necessity given the ever-growing screen sizes. We've seen it in action, and the screens' ability to look as sharp and colorful from the side is pretty astounding – even if you'll likely be watching head-on most of the time.

In 2020, there are other visual improvements we've seen on show already, including crisper upscaling that brings out more detail and sharper edges to images not originally intended for 8K.

But there's also a lot of changes on the audio side, with a new Object Tracking Sound technology (abbreviated as 'OTS') for its 4K QLEDs this year, with an even better OTS+ version for the new 8K QLEDs.

As we heard with the Q950TS flagship, OTS+ makes use of an array of audio drivers located around the panel casing – which are housed in the bottom, sides, and top of the television. With this OTS+ array, the set is able to shoot out audio from multiple places, giving a real sense of place to sound as it travels across the screen, rains down from above, or runs off into the distance. It's really, really good.

Samsung continues to show off its MicroLED panels, too, which feature millions of microscopic blue, red, and green LEDS for an incredible level of color and light control. With a modular design that enables Samsung to create various sizes and aspect ratios – as with The Wall display, which was shown off at CES 2020 in a whopping 292-inch configuration – it shows the start of a flexible future for home cinema, even if it's going to cost you a lot more than a standard consumer QLED.

What else do you need to know? Samsung uses its own in-house Bixby smart assistant to varying degrees – Bixby isn't really anyone's favorite – but also deploys support for Google Assistant and Alexa for mid-range and premium models, as well as Samsung SmartThings for connecting to other smart home devices. You can check out the best smart TV apps for Samsung too.

Many high-end Samsung sets also feature the OneConnect box, which outsources all of your HDMI, power inputs and the like into a piece of hardware separate from the TV, preventing a mess of cables hanging down from your new display.

Samsung also makes use of an Ambient Mode for its high-end sets, which helps the television to blend in with your decor by mimicking the color and pattern of the wall behind it – as well as stylishly display information on the news, weather, and the like.

2019 also introduced AirPlay 2 support, and an exclusive iTunes movies app for Samsung TVs, which, given the usual Samsung vs Apple rivalry, was odd (if refreshing) to see.

The Wall (now available in 75, 88, 93, 110, 150, 292 inches): Almost too big to be true? The Wall may not fit on most living room walls, but it's a testament to Samsung's desire to impress – featuring millions of microscopic LED for a huge level of color contrast and brightness control over each pixel. Made of a modular series of panels, the size is technically variable, though Samsung is still selling it in general size configurations as a starting point.

The first 143-inch model released in late 2018, while a whopping 219-inch version came the year after. The modular design allows for customization, though, and Samsung seems to be leading with different configurations for 2020. Whichever size you're looking at, you can be sure to expect an absolutely insane price tag. Check out our first look at The Wall by Samsung here.

Samsung’s classiest TV gets an upgrade with a QLED panel – which feels necessary, given that the picture quality was the only thing letting this gorgeously made hunk of metal down. Blending form and function, this style-focused television may be the most attractive television Samsung has put out. Check out what we thought in our hands on The Frame (2019) review.

Samsung's stylish Serif TV also gets a QLED panel upgrade and Ambient Mode this year, hoping to marry looks and picture quality. Mounted on four pointy legs, the set looks straight out of a fashion catalogue – and you can see what we thought of it in our hands on Samsung Serif TV (2019) review.

Unbelievably, Samsung’s monstrously large 8K TV is still considered a QLED TV. It’s the top of the list for numerous reasons – size and resolution being the most obvious two – but also its ability to use artificial intelligence upscale SD content to 8K HDR. While it's an absolute beauty to behold, the 65, 75, and 85-inch (or 82-inch in the UK) sizes will put you back a pretty penny, starting at £4,999 / $4,999 (around AU$7,082) for the smallest model. There's also now a 55-inch model for more mid-sized homes – check our review link below for more info.

Samsung's 2019 flagship 4K QLED is the Samsung Q90 QLED TV. Like last year you can expect Ambient Mode and better black levels thanks to its Direct Full Array panel alongside the screen’s insanely iridescent peak brightness. New this year is the addition of ‘Ultra Viewing Angle’ technology, which restructures the TV’s panels so the backlight passes through the panel with lights evenly onto the screen.

In the UK you get the choice of a smaller 55-inch model, while the US swaps this out with a larger 82-inch.

Moving down the line a bit is Samsung’s Q80 QLED TV. Like the Q90, you’ll see a Direct Full Array panel with a feature set that includes Ambient Mode and the Bixby. The Q80 uses far fewer backlight dimming zones than its Q9FN sibling  but still looks great and has a more affordable price point. In the UK, the alternative Q85 QLED model bundles in the external OneConnect box and tidy transparent cable too, as well as coming in a larger 75-inch size.

The Samsung Q7FN was the golden ticket to 2018's QLED line-up. Offering one of the best price-to-performance ratios in the entire line-up, it was the Q7F that roped droves of AV enthusiasts into buying a QLED TV. That said, it could be our TV of the year in 2019 as Samsung has listened to our feedback and swapped the edge-lit display for full array LED-LCD that will definitely improve contrast.

Last up in the QLED line-up is the entry-level Samsung Q60 QLED TV. The Q6-Series began its life as a special edition that Samsung added around the holidays in 2016, and now it appears the TV has claimed a permanent spot in the line-up. The Q60 is a bit less bright overall than the rest of its Quantum Dot-equipped brethren and still uses the old edge-lit design but if you’re looking for some of the same spectacular colors at a spectacular price, the Q60 will be the best place to get it.

The first highest series in Samsung's 4K UHD lineup is the RU8000, a sequel to last year’s NU8000. We expect that the RU8000 will use an edge-lit LED LCD panel and a quad-core processor, but that's yet to be confirmed. Expect both HDR10 and HDR10+ support in addition to Bixby and Samsung’s Smart TV platform.

Underneath the RU8000 is the curved Samsung RU7300. It's not available in as many sizes as its older sibling, but it should fulfill the niche of a curved screen for folks who want to upgrade to a 4K HDR TV. You’ll likely find the same edge-lit LED LCD panel and processor as the RU8000, but that's still to be determined.