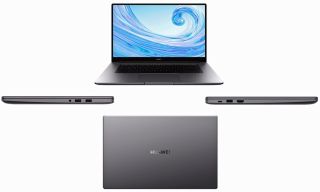 The Huawei MateBook 15-inch could be a great alternative for folks who need more of a variety on ports. (Image credit: Evan Blass)

Huawei MateBook 15-inch is coming, but whether or not it will be available in the US is still anyone’s guess.

According to MSPoweruser, leaker Evan Blass discovered what could be the first complete renderings of Huawei’s upcoming additions to its MateBook laptops: a 14-inch variant, and a slightly larger 15-inch. And, it’s looking like Huawei’s largest MateBook yet is looking to give Apple’s MacBooks a run for their money – at least, port-wise.

Based on the renders, the Huawei MateBook 15-inch, codenamed Bohr, will be rich in ports, with one USB-C port (likely thunderbolt-enabled and could be used for charging), a full-sized HDMI port and two USB-A ports – not to mention, a headphone jack. In comparison, the MacBook 16-inch also has four ports, but they’re all Thunderbolt 3s, which considerably limits many users still using USB-A compatible devices.

It will also feature Huawei’s fingerprint reader-cum-power button, impressively thin bezels and a 16:9 aspect ratio. While there’s no word yet on what the specs will be, however, the Huawei MateBook 15-inch could be a great alternative for folks who need more of a variety on ports.

Huawei MateBook 15-inch in the US

Unfortunately, Huawei’s woes in the US has left its devices’ fate in the country up in the air. Earlier this year, the U.S. Department of Commerce blacklisted Huawei while President Donald Trump signed an executive order preventing American companies from using any telecom equipment produced by firms that are deemed threats to national security.

This led to Google suspending its business with the company, which effectively prevents Huawei from using the Android operating system that’s been powering its smartphones.

However, the Trump administration has been issuing 90-day reprieves, allowing companies to continue selling to Huawei as trade discussions between the US and China continue. On August 19, the US gave Huawei its third 90-day reprieve, Financial Times reports, an extension that will let Google to continue updating its Android software on Huawei smartphones.

This could be a good sign for Huawei, especially since the U.S. has yet to provide sufficient evidence to prove its case. So, all is not lost.

If things go well for Huawei and the US ban doesn’t happen, we could see the Huawei MateBook 15-inch and 14-inch variant hitting the US streets in Spring 2020.