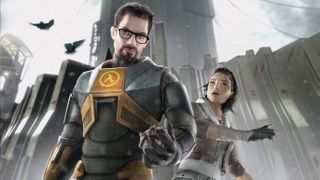 For a game that's never been officially announced, Half-Life 3 might be the most long-awaited game of all time. And while its series developer, Valve, shows no sign of revealing it any time soon, there's a glimmer of hope for headcrab-blasting fans in VR.

What is claimed to be a leaked interview transcript between Valve executives suggests that a new Half-Life title is on the way called Half-Life: Alyx, and that it'll be a virtual reality exclusive.

The interview is said to be between a "Geoff", which is likely games broadcaster Geoff Keighley (responsible for the annual Game Awards and the 'Final Hours' documentaries about Valve games), Robin Walker (co-developer of Team Fortress 2) and an unnamed third party.

"March 2020, 'Half-Life: Alyx' comin' out", says the Geoff in the transcript, which also suggests the game will be revealed at The Game Awards on December 12.

For the time being, and if the transcript is to be believed, the focus is very much on VR at the moment, rather than an optional keyboard and mouse version.

"I mean we would love to be delivering a version of this that you could play with a mouse and a keyboard, but like as we said, it began as an exploration of VR," says the unnamed person.

Leaked by the same source that revealed DOTA Underlords, there are a few details that add veracity to the piece, such as this quote on play testers:

"You can see their whole body-- [sic]Respond to the situation. You know, panicking, dropping clips on the ground as they fumble their weapons 'cause a zombie's in front of them, all these things, they're just - it's been really fun watching playtests."

So, can it be believed? Any mention of new Half-Life content from Valve has to be taken with a pinch of salt – it's known that the company has played with ideas around the franchise for many years, but it's highly secretive and has as-yet failed to commit to any of its Half-Life experiments.

However, with the release of its Valve Index VR headset earlier this year, Valve did state that it would be releasing a 'flagship VR game' before the end of the year. There wouldn't be a bigger flagship property for Valve than Half-Life.