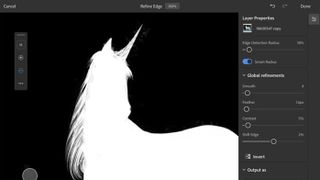 Adobe has applied a spot healing brush to the reputation of its new Photoshop for iPad app by releasing a list of incoming features, which many users were hoping to see when it launched a few weeks ago.

As we noted recently in our Photoshop for iPad review, the app is currently a very basic imitation of the desktop version due to a paucity of tools and a lack of support for Adobe Camera Raw. But the company has now released a roadmap of features, including Lightroom integration, to confirm that the app will soon start building on its promise.

By the end of 2019, the app will receive a new AI-powered subject selection tool to help you automatically choose a subject to start working on. This will be a much-needed addition to the Quick Selection tool already present in Photoshop for iPad, which is only enough for very rough-and-ready cutouts.

Also coming at some point in 2019 are improvements to cloud documents, which will apparently ensure swifter upload and download speeds for documents saved between the app and the desktop version of Photoshop. But it's the features coming by mid-2020 that will see the app really start to realize its potential.

One of our biggest criticisms of the current version of Photoshop for iPad is the lack of tools to make pro-level cutouts of tricky subjects like hair or fur. Well, Adobe will be addressing that in the "first half of 2020", with the addition of the Refine Edge brush, which is helpful for selecting objects that are a mix of soft and hard edges.

In the same timeframe, Adobe will also be adding more granular retouching control, thanks to the addition of Curves for tonal adjustments and improved brush sensitivity.

But perhaps the biggest news is that Lightroom integration will also be arriving by mid-2020. This will mean you'll be able to process raw images in Lightroom premium on your iPad, before importing them in Photoshop for further tweaks.

The Photoshop for iPad roadmap certainly doesn't cover our entire wishlist of features for the app, but it's a start that suggests it could soon turn from a place to sort out ideas into somewhere that pros and hobbyists will actually include as part of their workflow.