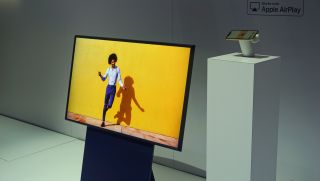 As ever with the annual tech expo, the biggest TV makers from around the world chose CES 2020 to launch their new television lineups for the year ahead. While some had little on display – particularly Panasonic, who only briefly showed its new HZ2000 flagship – others had plenty else to unveil for those of us hungry for new panels.

With new model lines, refreshed sets with improved panel technologies, and some new processors making things interesting, there's still plenty to contend with – and here are the five best TVs of the lot.

Bezel? What bezel? Samsung pulled a neat trick with its 2020 8K flagship, the Q950TS, which pulls back the curtains on a QLED panel for a TV that's truly 99% screen.

Tying in nicely with Samsung's 'infinity display' smartphones, and offering an expansive view – alongside Samsung's best and latest processing, 8K resolution, and an innovative 5.1 surround sound speaker system – this was one of the prettiest sets we got to lay our eyes on.

With a strong showing from Samsung's The Frame TV, too, which now comes in a sleek 32-inch size, and a rotating Sero TV for watching portrait / mobile video in style, it's clear the world's biggest TV-maker is thinking hard about the aesthetics of its lineup.

What a year for LG OLED TVs. Alongside a revamped a9 Gen 3 processor, new algorithms for facial recognition and automatic picture mode calibration, we've also got a brand new model line: the Gallery Series OLED.

The GX model is an impressive all-in-one set that takes the slim form factor of the 'wallpaper' W Series, and integrates it with built-in speakers instead of the latter's bulky soundbar. It does require professional installation, and we haven't yet got the price point to compare it fairly against the other OLEDs coming from LG this year.

Given it's effectively replaced the gorgeous E Series, it will really have to earn its spot in LG's 2020 lineup, but the signs so far bode well.

One of the biggest surprises of the show floor was that TCL is bringing its Mini LED panel technology to its popular mid-range 6-Series sets. We'd seen the Mini LED tech – which boosts black levels and overall contrast through its huge number of contrast control zones – come to the more premium 8-Series already, so it's reassuring to see it trickle down TCL's television ranges further.

Along with TCL's 8-Series 8K Mini LED and 5-Series QLED, there's a lot of premium tech being deployed across its product lines, and that's something to get excited about.

Panasonic may have only shown off one set – and only briefly during its press conference – but it's still set to be a good one. Last year's GZ2000 OLED was a real powerhouse for home cinema, with a custom OLED panel and 140W Dolby Atmos speaker system to hammer your eyes and ears.

2020's HZ2000 uses the same HCX Pro processor as last year, so we may not see much of an uptick in visual quality. We're sceptical of what Filmmaker Mode promises, too, but the addition of Dolby Vision IQ – which uses external sensors in the set to adjust the pictures onscreen based on the level of light in the room – is exciting. Given OLED's reputation for dim outputs, this additional brightness control could be what wins the naysayers over.

We have to include the Samsung Sero TV for its sheer confidence. As a television that literally rotates so you can watch mobile or portrait videos on the big screen, it feels innovative, futuristic, hilarious, and somewhat unnecessary all at once.

Anyone with the Samsung Note 10 can move the set's position simply by rotating their phone, while others have to make do with using the remote or smartphone app – it's a real joy just to watch in action.

So, yes, this isn't a new TV – but the Philips 804 OLED marks the first time that the TV maker has brought any of its OLED models to the US.

We were quite surprised to see the set on the show floor: the Philips name is licensed by Funai in North America, so the OLED TVs we so enjoy in the rest of the world don't ever make their way over – until now, apparently.

With a brilliant 4K OLED panel, broad HDR support (Dolby Vision, HDR10+) and Philips' proprietary Ambilight projection, it's a knockout OLED television, and it coming to the US can only be a good thing.