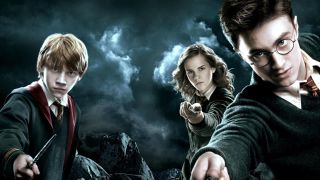 If you want to watch the Harry Potter movies in order, we can tell you how. Until the onslaught of franchise blockbusters in the last few years, Harry Potter was the biggest movies series in Hollywood. Matching the success of the JK Rowling novels that inspired the films, the saga of a boy wizard taking on the vile Lord Voldemort has already captivated generations with its vivid world of magic.

The movies didn’t end with 2011’s Harry Potter and the Deathly Hallows: Part 2. Rowling has also returned to her Wizarding World’s past, scripting the '20s-set Fantastic Beasts prequel movies which introduce an early version of Albus Dumbledore, and his former friend/arch-enemy Gellert Grindelwald.

That means there are 10 movies to get stuck into, spanning seven decades of magical history. But how do they all fit together? And what’s the best order to watch them? You’ll find out in this guide to all the fantastic Harry Potter movies and how to watch them. It works like a charm…

Before you enjoy the Harry Potter movies in chronological order, it's worth knowing there are three more Fantastic Beasts prequel films planned. We know that the series will end with a duel between Albus Dumbledore and former BFF-turned-nemesis Gellert Grindelwald in 1945, but everything in between is currently a mystery. Below, we decided to just include everything Harry Potter-related that it's possible to watch right now – including the stage play, The Cursed Child.

Aside from the occasional flashback, the Hogwarts-set movies in the series follow a simple linear structure – mostly thanks to Rowling’s decision to use the British school calendar as a framework for her narrative. That means each of the seven books in the Potter series focus on a different school year (running from September to August), starting in 1991, when Harry’s 11 years old. (While the movies were made in the ’00s, and feature the occasional anachronism such as 21st century mobile phones or music, it’s probable they follow the same carefully crafted timeline as Rowling’s books – placing the Harry Potter films some 70 years after their Fantastic Beasts counterparts.)

And Harry Potter’s story does continue into the future – though not on screen – thanks to the hit stage play Harry Potter and the Cursed Child. The story picks up in 2017, during the epilogue from Harry Potter and The Deathly Hallows, and features the now grown-up Harry, Hermione and Ron, and their kids.

No complicated interweaving timelines to deal with if you watch the Potter movies in release date order – it’s two distinct series, with an (as-yet) incomplete set of prequels following on from the parent franchise. That means there’s no need to introduce any kind of 'Machete Order' – yet – though if we get some massive revelation in Fantastic Beasts 3, 4 and 5, that may change. Fantastic Beasts 3 starts shooting early in 2020, ahead of a 2021 release.

It’s also interesting to note that there are more Harry Potter movies than there are books, with seventh instalment The Deathly Hallows split into two parts (a trick repeated by Twilight and The Hunger Games) because there was so much story to fit in. We’re sure the extra box office didn’t hurt either…

As with the Harry Potter books, opinions on which entries in the series are the best are incredibly varied and subjective. Indeed, ranking the Harry Potter movies by their IMDb user scores reveals a remarkable consistency in fan response, with all eight instalments clustered between 7.4 and 8.1 out of 10.

The two Fantastic Beasts movies are noticeably the least loved entries in the Wizarding World, a fact perhaps reflected by the second movie's drop in box office. The most successful of the two, Fantastic Beasts and Where to Find Them, made more money than just one of the Potter movies (Prisoner of Azkaban), but seeing as it had 12 years of inflation on its side, it’s debatable whether it actually outperformed the earlier film.