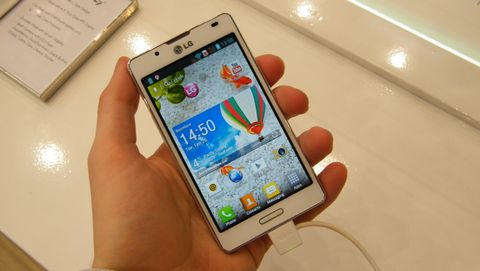 Our favourite of the new L-Series 2 trio

The LG Optimus L7 2 is a surprisingly capable budget smartphone which offers up plenty of features for not a lot of cash. We were impressed with its 8MP camera, stylish design and smooth operation, although web surfing could do with a bit of a boost.

LG is refreshing its bottom end offering at MWC 2013 with a trio of new devices taking over from their namesakes (minus the number 2) which launched at the same show last year.

All three are expected to launch during the second quarter of this year in markets across the world, and the Optimus L7 2 has been confirmed as coming to the UK, but it will arrive a bit later than the Optimus L5 2 and Optimus L3 2.

At first look the LG Optimus L7 2 could be mistaken for a premium handset thanks to its smart design and metallic border.

Pick it up and you'll immediately recognise that relatively cheap plastic feel, and the lack of any significant weight goes further to reveal this isn't a top end device.

It's still comfortable to hold though, and an even balance makes it easy to manipulate in one hand, although we would have preferred the back to be slightly more curved to give a snugger fit in our palm.

There's a power/lock key on the right side of the handset, while on the left you get a volume rocker switch and an additional quick key - all of which are easy to hit whether you're holding the Optimus L7 2 in your right or left hand.

The quick key also features on the Optimus L5 II and you can programme this button to launch the app of your choosing, plus you can set it to act as the shutter key when in the camera app.

It's a useful feature to have and one we reckon we'd use a lot if it was on our current smartphone (currently a HTC One X, since you ask).

On the front of the LG Optimus L7 2 there is a 4.3-inch IPS display with a relatively mediocre 480 x 800 resolution, but it's bright, clear and perfectly functional.

There's a 1GHz dual-core processor and 768MB of RAM to run the action on screen, which consists of the Android Jelly Bean operating system.

Everything runs without a hitch and while it may not be as slick and speedy as the top-of-the-range handsets, the LG Optimus L7 2 has a pleasing user experience.

LG has applied a basic overlay to Android which sees the addition of manufacturer specific apps and a range of quick settings in the notification bar allowing you to toggle features such as Wi-Fi, Bluetooth, GPS and NFC.

In terms of LG specific apps the Optimus L7 II comes equipped with Quick Memo which allows you to draw or write on top of any screen you're currently viewing, just in case you need to jot down a quick message.

While Quick Memo also features on the other two handsets in the L-Series 2 range, the more powerful Optimus L7 2 comes with a couple of other goodies, the first of which is QSlide.

QSlide allows you to access another application while watching a movie, with the video becoming a transparent layer on the display, with a toggle to adjust the opacity depending on the other task you want to perform.

Another handy addition is the Q Translate app which is capable of reading 60 different languages and then translating the text for your delectation.

In online mode you're able to convert whole sentences to your native tongue, but if data connection evades you the offline mode will still translate single words.

There's only 4GB of internal storage on the Optimus L7 2 which is a little disappointing, but luckily LG has included a microSD slot under the back cover allowing you to expand your memory options.

Also under that back cover is a 2,400mAh battery which should hopefully give you a decent amount of life, but we'll put that to the test during our in-depth review.

Round the back you have an 8MP camera, which is impressive at this price point, accompanied by a single LED flash while on the front there's a VGA snapper for video calls.

Shutter speed, as with the other two L-Series handsets, is a little sluggish on the Optimus L7 2 but the amusingly named "Cheese Shutter" once again doesn't fail to bring a smile to our face as we talk to the phone to take a picture.

Image quality is pretty decent, as you'd expect from an 8MP snapper and in the camera department at least the Optimus L7 2 can certainly challenge the devices in the tier above it.

The decently sized responsive touchscreen means that the default keyboard is well spaced and easy to type on, with a good level of accuracy, spell check and next word prediction.

We were a little let down by the internet browsing capabilities on the Optimus L7 II though, with pages taking several seconds to load up.

We hope it was due to the congested Wi-Fi network the handset was connected up to, but the jury's out until we put the handset through our thorough review process.

The LG Optimus L7 2 is a surprisingly capable budget smartphone which offers up plenty of features for not a lot of cash.

We were impressed with its 8MP camera, stylish design and smooth operation, although web surfing could do with a bit of a boost.

Out of the three new L-Series 2 handsets the LG Optimus L7 2 is our favourite and we reckon it will offer consumers pretty decent value for money when it lands later this year.