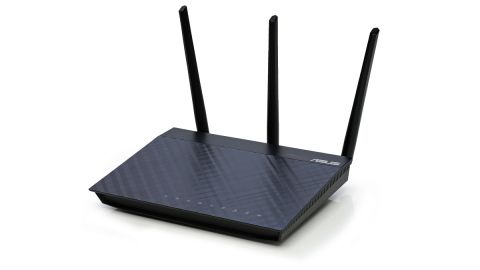 The Asus RT-N66U Dark Knight is certainly a sleek little box and, with its angular design and black finish, lives up to its Dark Knight name; it certainly wouldn't look out of place running Bruce Wayne's torrent box.

On the top of the unit is a row of very bright blue backlit LED status indicators, just the job to see what's going on if you have the unit tucked away somewhere dark. Like the Batcave.

Right, enough of the Batman analogies…

Mounted in the rear of the router there are five Gigabit Ethernet ports; four LAN and a WAN along with a couple of USB ports - which unfortunately are only USB 2.0 - a WPS button and the mounts for the three aerials.

The reset button for the router is also on the back panel though maybe this would be better placed on the front or sides of the unit to allow easier access.

It is very easy to setup though, either via the supplied CD or by using its web interface.

That uses Asus' new ASUSWRT dashboard, which is well laid out and manages the neat trick being simple enough for beginners to navigate around but at the same time offering access to all the router's features for the more experienced user.

Such a tinkerer can play with delights like AES and TKIP encryption and a whole lot more besides.

Performance wise at 5GHz it is very good and handled the transfer of our 3GB test file without any problems and did it very quickly. Although at 2.4GHz things got a lot more pedestrian, even at its highest bandwidth speed.

The excellent web interface that Asus used for the Asus RT-N56U has been improved still further.

The ASUSWRT dashboard that the RT-N66U Dark Knight uses makes the router that much easier and faster to set up. It also makes it far simpler to monitor and allows easy access to the host of features that the unit comes with, regardless of whether you're a beginner or advanced user.

It's also packed with features, including support for a 3G dongle and also has the ability to be set up through a mobile device as well as a PC.

Still, it is a whole lot of router for the money.

A cracking, feature-rich router, but comes at a rather hefty price for a home router.