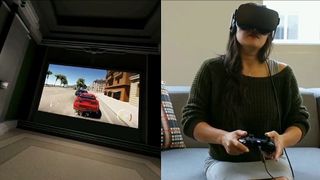 Microsoft is even more involved with the Oculus Rift than we thought. During a press event in San Francisco, Calif. ahead of E3 2015, Head of Xbox Phil Spencer announced that Windows 10 will support the virtual reality headset natively through a direct streaming feature.

"It was really important that we are able to bring the greatness of Xbox, Xbox Live and all of the games that people have created to PCs and tablets everywhere. I'm really proud to announce that that same streaming capability will be available for Oculus Rift," Spencer said on stage.

In addition to every Oculus Rift headset shipping with a wireless Xbox One controller, Spencer went on to announce that players will be able to stream Xbox One games directly to the Oculus Rift through a virtual cinema feature developed in tandem by Microsoft and Oculus VR.

A dash of a demo

Spencer then went on to introduce a video demo of how this will work and look once the Rift launches in the first quarter of 2016.

The term "virtual cinema" should be taken literally, as what you'll see inside the headset is a virtualized living room facing a flat screen that displays the game content.

Xbox One games streamed to Oculus Rift will not allow for full 3D movement within those game worlds. Rather that same freedom of movement is offered within a virtualized space displaying those games on a flat surface.

In theory, this could allow for you to play Xbox One games on a larger-seeming screen than the TV you own. But this is likely just the first phase of Microsoft and Oculus's partnership – it's easy to imagine future Xbox One games to adopt this feature in earnest with true 1:1 streaming.