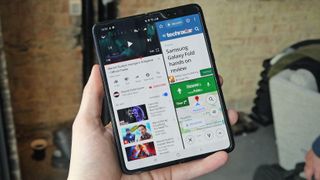 Following the Samsung Galaxy Fold's initial delay, it was expected that the troubled foldable device would arrive sometime in June. Now, it appears the smartphone-tablet hybrid may arrive a month later in July, according to comments made by a Samsung Electronics official.

As reported by Yonhap News Agency, the Samsung representative stated that the Galaxy Fold's "release schedule has not been decided, and we are in a position to announce the launch schedule in a few weeks."

Due to the uncertain future of Huawei's Mate X foldable following strict US sanctions that have been placed on the Chinese company, it's believed that Samsung is taking some extra time to make sure the device's durability problems are taken care of.

Originally slated for an April 26 launch, the Galaxy Fold's release was put on hold following screen-related problems experienced during the early review phase, including display damage caused by the removal of a protective layer.

In the meantime, US Samsung Galaxy Fold pre-orders will be canceled on May 31 unless customers offer their express permission to keep their order active.