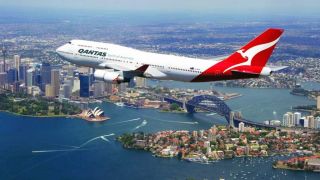 Qantas announced the launch of inflight streaming services for its domestic passengers last week and has now followed that up with its first trial of the on-board internet system on a chartered Sydney to Brisbane flight.

The Flying Kangaroo sent 140 of its employees on board a Boeing 737 to test the new Wi-Fi and the service passed with flying colours. Each passenger had at least one device, while some played around with more than a couple of gadgets.

“Typical download speeds were between 7 and 12 megabits per second to each connected device,” gushed Qantas in its Roo Tales blogpost yesterday.

During the testing, flyers were asked to perform various tasks, like downloading apps, streaming different forms of media and performing a speed test.

Qantas expects that, on any given flight, about half of their passengers would be connected to the Wi-Fi on a single device. So with every single passenger on board the charter flight (plus the pilots accessing weather data on the iPads), this test was a success, clocking in with connection speeds that exceeded Australia’s average of 9.4Mbps.

A user typically requires a minimum of 1.5Mbps download speed to stream media – most likely with grainy image quality. A speed of 2.5Mbps is good for standard definition, 3.5Mbps for 720p HD resolution and 6.5Mbps for a full 1080p HD experience.

If Qantas is able to consistently achieve speeds of up to 12Mpbs on all its flights, it’s going to have some very entertained passengers indeed.

The national airline will soon start public trials before rolling out the service across 80 domestic flights from mid-2017.