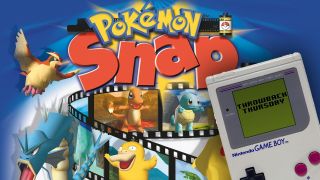 ‘Come on’ I mutter, watching Pikachu amble slowly towards the bait I’ve thrown for it through the viewfinder. My finger hovers impatiently over the trigger as he moves tantalizingly close to the central position I need.

‘Just a bit closer’ I coax barely above a whisper, afraid that anything louder will send him running. Finally Pikachu walks into the crosshairs and the red dot falls right on the center of his adorable button nose.

Without hesitation I pull the trigger.

Yes, for this week’s Throwback Thursday we’re looking down the lens at the classic Nintendo 64 first person shooter, Pokémon Snap.

Capture all the Pokémon

That’s right, first-person shooter. When you think about it that’s exactly what Pokémon Snap is. Replace the gun with a camera, the enemies with adorable Pokémon and grenades with apples and you’re pretty much left with Doom on a track. Right? At the very least you have a less fatal Fatal Frame.

The premise of Pokémon Snap is simple: Professor Oak, in his usual highly questionable habit of delegating the physically arduous aspects of his job as a researcher to young people for what appears to be absolutely no recompense other than the experience of an adventure, needs you to take some pictures on Pokémon Island for a report he’s putting together.

To Oak’s credit, he does at least provide you with a car to get the job done.  It’s from this sweet, slow moving ride that you take pictures of the Pokémon across six different locations, from volcanoes to underground abandoned power plants. Seriously, Oak, what the hell?

Once you’ve taken the photos, Oak will then assess them and award you points based on how good he thinks they are. Oak is, apparently, a leading and highly discerning authority on what makes a good photo as well as on Pokémon. I suppose being the Fagin of the Pokémon world leaves you with a lot of time to work on your hobbies.

Upon starting Pokémon Snap, my nostalgia radar was immediately set off by the fact that I got to blow on the game cartridge before plugging it into the Nintendo 64. I didn’t actually have to blow on it but if I’m going to do a throwback, I’m going to do it right.

The first thing that struck me is that the game didn’t actually look as bad as I expected it to. Alright, compared to the games that we see today it’s utterly horrendous, but for a Nintendo 64 game created in 1999 the Pokémon character animations are really quite impressive.

The game world has all the usual block-like 3D objects that look like they’ve been covered in nature-inspired wallpaper made by someone who has only the vaguest notion of what the natural world looks like.

However, real care has clearly been put into the creation of the Pokémon that populate this otherwise unimpressive game world and their frolicking animations and expressions are genuinely a joy to watch.

Something I really love about Pokémon Snap is that it’s one of the only Pokémon games that gives us a real sense of what it’d be like to encounter one of these creatures in a real-world setting and see them moving around alongside each other.

Plus there’s no battling required.

The mainline Pokémon games with their top-down third-person perspective and random encounters don’t really show Pokémon moving around the game world and you don’t really get a sense of their sizes in relation to you or one another.

Pokémon Snap’s first-person perspective does offer this but it sometimes yields perplexing and borderline frightening insights. Pokémon like Pidgey, Pikachu and Butterfree are largely the size I would have expected them to be.

Then there’s Pokémon like Voltorb who, it turns out, is disturbingly large and I was really glad I couldn’t get out of the car lest I find myself in an Indiana Jones and the Raiders of the Lost Ark scenario.

Although Pokémon Snap is an extremely short game, it has a surprising amount of replay value. As you make your way through it, Professor Oak gives you a small number of items that allow you to interact with the world and the Pokémon slightly more. For example, you can throw apples to lure Pokémon closer, throw Pester balls to repel them and even play the Pokéflute to make them dance and make you feel like the Pied Piper of Kanto.

You really need these items to add variety to your pictures and score high points so it’s absolutely worth going back through levels to play and see if you can do anything differently.

There are a number of Easter eggs to unlock and now that I have a patience I didn’t have when I was younger I was much happier to spend time uncovering them and in turn uncovering a surprising amount of depth in a very simple game. It’s not a kettle pond, but Magikarp could do a decent jump from it.

Although there are more than a few people that would like to see a Pokémon Game come to Nintendo Switch, a remastered Pokémon Snap isn’t really one I’d clamor for. Instead, I think there’s definitely room for Pokémon Snap in virtual reality.

A first person perspective, extremely basic movement required, short play times with incentive to pick it back up and uncover more Easter eggs? It’s a ready made VR hit. Well, as long as it saw some graphical upgrades because I’m not sure how getting too up close and personal with those blurred environments would impact the eyes.

Failing that, it'd make a great addition as a ride in Nintendo's upcoming theme park.

Pokémon Snap is a great chance to look at the Pokémon world but not through the battle-focused eyes of a trainer. It remains one of the most surprising and individual Pokémon games out there and although its slow pace certainly won’t be for everyone, it’s a great pick for fans and those who like to see the first-person shooter mechanic used in an interesting way.