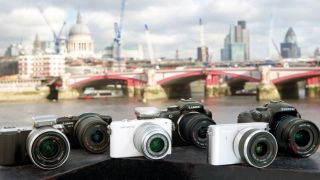 Which budget compact system camera (CSC) is best for you?

There's nothing subtle about a full-sized DSLR. Walk around with a hefty camera and lens combination hanging from your neck and it's a clear signal of your intentions. It's not a problem most of the time but, when you're trying to take candid shots without drawing attention to yourself, smaller is better.

For those of us without a black belt in karate, there are also times when a high-value DSLR resting against your chest can feel like you're wearing a T-shirt with 'Mug Me' printed on it.

With their mirror-free shutter release and their ability to turn off autofocus beeps and other sound effects, compact system cameras (CSCs) are very quiet in operation. You can whip one out of your pocket, take a couple of shots and nobody need be any the wiser.

They're great in situations where security may be a little sensitive; nobody usually minds people snapping away with mobile phones or compact cameras, but eyebrows are raised when a full-blown DSLR comes into view.

If you're using a zoom lens rather than a 'pancake' wide-angle prime, the overall size of a CSC becomes larger. Even so, the big bonus is that, just as with a DSLR, you can fit the best lens for the task at hand. Like for like, CSC lenses can be rather smaller than their DSLR counterparts, but a lot depends on the size of the image sensor.

The new Nikon 1 cameras have the smallest sensor sizes in this CSC group test, and therefore the biggest focal length multiplier or crop factor.

Both the Nikon J1 and Nikon V1, the latter of which boasts an electronic viewfinder, higher-resolution LCD and a bit more sophistication, have image sensors that measure just 13.2x8.8mm. This results in a crop factor of 2.7x.

The upshot is that to get a typical 'standard' zoom range equivalent to around 27-82mm on a full-frame camera, the Nikon 1 J1 only needs to use a small 10-30mm lens, whereas the Samsung and Sony need a bigger 18-55mm zoom.

Indeed, fit the kit 18-55mm zoom lens on the extremely compact Sony NEX-C3 and it feels a bit like the tail's wagging the dog.

A drawback of physically smaller sensors is that the individual pixels are also likely to be smaller, so gather less light. There's therefore the danger of increased image noise, especially when shooting in dull lighting conditions and at higher ISO settings.

Despite all CSCs having larger sensors than regular compact cameras, Nikon limits its J1 and V1 cameras to just 10.1MP. For CSCs with larger sensors, you can expect higher resolution. The 16MP Panasonic G3 and 16.2MP Sony C3 lead the way.

The majority of CSCs don't come with viewfinders, with images having to be framed using their large rear screens. Being able to see what you're doing when bright light is bouncing off the screen can be an issue, placing high demands on the clarity and non-reflective properties of LCD panels. Also, to fend off camera shake at slow shutter speeds, locking a viewfinder into your face might not be comfortable, but it does make for more stable handheld shooting.

In both respects, the Panasonic G3 and Samsung NX11 have the advantage of a built-in electronic viewfinder, which offers an alternative to framing shots on the LCD screen – or the AMOLED (Active-Matrix Organic Light-Emitting Diode) that's fitted to the NX11.

Not to be outdone, the Panasonic G3 is the only camera in the group to feature a fully pivoting screen, and it's also touch-sensitive for easy poke-and-prod menu navigation. The baby Panasonic GF3 also sports a touchscreen and, in both cases, there's a useful option to release the shutter with a tap of the screen rather than using the shutter button.

There's no pivot facility on the GF3; next best is the Sony C3's screen, which at least has a tilt mechanism, along with a class-leading resolution of 921k pixels. In all the other cameras, the LCD screen is completely fixed.

For further defence against shake, image stabilisation is a key benefit. Only the Olympus E-PM1 features built-in sensor-shift stabilisation, which works with any lens. All other manufacturers have opted for optical stabilisation on a lens-by-lens basis.

Naturally, there's less need for stabilisation with fast-aperture prime lenses, or with wide-angles where camera-shake is less of an issue, but it's increasingly necessary at longer focal lengths and relatively 'slow' kit zoom lenses that usually have a maximum aperture of f/3.5-5.6 as you extend through the zoom range.