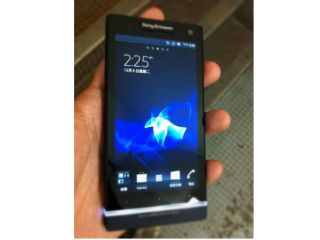 Anyone who's been desperately awaiting further news of the Sony Ericsson Nozomi is in luck – another sneaky double agent has scored some pictures of it and this time they've even managed to turn the handset on.

It's been barely two days since we last caught sight of this upcoming Xperia handset, which looked rather impressive when off, not much more than a massive expanse of black screen area with a slender silver bar running along the base.

Sadly, when switched on, the screen size shrinks down and the dreaded bezel makes itself known – it's not too bad at the sides, but the base of the handset suddenly becomes huge.

Still, the quality of the screen looks good, and the Perspex bar is quite smart (if a little reminiscent of the horrible Pureness) so it's not all bad.

We can also more easily discern the front-facing camera now, and the source who provided the image claims it comes with a dual-core processor and a 720p LCD screen.

Engadget reports that a Hong Kong carrier is already testing the handset so look out for it in the next few months – although we're still expecting a trade show launch, most likely CES 2012.

From HKEPC via Android Central, Engadget