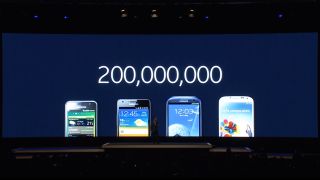 That number looks even bigger spelled out

Samsung revealed during its Samsung Unpacked 5 keynote at MWC 2014 that it's sold 200 million Galaxy S devices around the world so far.

The figure came from the mouth of Samsung's Head of Mobile Communications, President and Co-CEO JK Shin, just before he unveiled the Samsung Galaxy S5.

"I truly appreciate the 200 million customers around the world who have chosen our Galaxy S devices," Shin said.

The presentation opened with a lengthy orchestra concert and an intro video that showed attractive-looking folks working out, getting married and biking through New York City while using Samsung products.

But the company spent most of its time describing the new features of the Galaxy S5, with a focus on fitness and the phone's camera. Samsung Vice President of European Telecommunications Operations Jean-Daniel Ayme said it has the fastest auto-focus of any smartphone at 0.3 seconds.

In addition, Samsung is upgrading the original Galaxy Gear to Tizen OS.

Keep checking TechRadar for all the latest new from MWC 2014 as the show goes on!