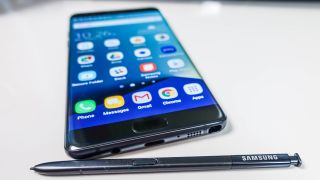 "Shipments of the Galaxy Note 7 are being delayed due to additional tests being conducted for product quality," said Samsung in a statement to Reuters. Samsung did not elaborate on which regions of the world would be affected by the delay, as there are several variants of the phone for different markets.

The smartphone maker didn't elaborate on what exactly it's testing for, but reports of exploding phones could be the culprit. Two separate reports linked the Galaxy Note 7 explosions to device charging. Whether incompatible chargers or cables were used is unclear.

Samsung responded swiftly by acquiring the damaged phones for testing. News of delayed shipments of the Note 7 could deal a big blow to Samsung's quarterly profits.

Demand for the Galaxy Note 7 has been strong, said Samsung speaking to Fortune. So much so that the company is trying to boost production to meet the high demand, though news of today's delays may hamper production.

Hopefully Samsung sorts out the problems with the Galaxy Note 7, or customers might flock to Apple's iPhone 7, which will be announced next week.