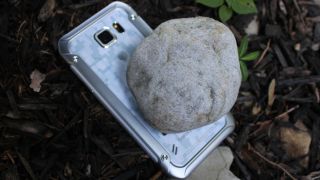 With the Samsung Galaxy Note 5 going on sale in the US Friday, it's only fitting we're already hearing rumors about the next version of the 5.7-inch phone.

Word comes from tipsters that the Samsung Galaxy Note 5 Active will arrive on AT&T in November. It'll reportedly be a waterproof device with an IP68 rating, but even better than that will be its power supply.

According to PhoneArena's sources, the Note 5 Active will lug a whopping 4,100 mAh battery in its frame. That's well above the Note 5's still-impressive 3,000 mAh juicer as well as pretty much every other phone in the field (the Huawei Ascend Mate 2 has a 4,050 mAh battery).

The Galaxy S6 Active saw a sizable jump in battery over the Galaxy S6, so it's not out of reach for the Note 5 Active to see a similar spec boost.

Of course the idea with an Active phone is durability, so while we've applauded the Note 5's design improvements over the Note 4, we'll likely see some rougher edges if the Note 5 Active comes to fruition.