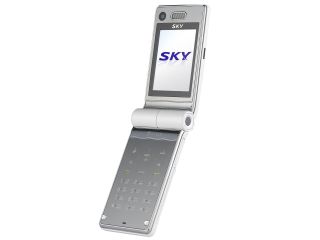 We've seen a little too much news about mobile phones recently but why stop when we're on a roll? Pantech 's latest Korean handset seems refreshingly simple compared to many but that doesn't mean the IM-U170 isn't praiseworthy.

Available on Pantech's Sky label for around 250,000 Won (£140), the metallic clamshell phone is made of a magnesium-coated plastic and has an elegant flat keypad reminiscent of some flashier models. Aside from the dual cameras - a 2-megapixel number on the outside and a VGA camera for videocalls - the most unusual feature is the face-recognition software that's built in.

Pantech says the facility can be used to lock and unlock the 106g phone but that the most innovative use is in the bundled games that use facial gestures to control on-screen actions. We can't comment on how much fun that is yet, but at least it's different.

Other points to look out for include an MS Office document viewer, an MP3 player with 120MB of memory, a Korean-English dictionary and a Flash-based software interface. Oddly, if you look closely you'll spot one button labelled 'NATE' and another with 'june' inscribed below it. Seems things really are different over there. J Mark Lytle