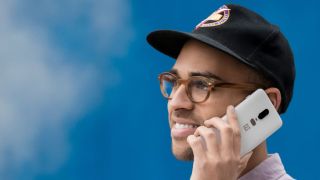 The OnePlus 6T release date is November 6, after the brand confirmed the on-sale date ahead of its launch at the end of October.

OnePlus is revealing more and more about it's upcoming flagship phone, and this latest leak joins confirmation of no headphone jack, improved battery life, an in-display fingerprint scanner and an October 30 launch date.

However, if you're in India you'll be able to get hold of the handset even sooner, with an official OnePlus 6T release date of November 2 in the country.

We will be reporting live from the OnePlus 6T launch in New York to bring you everything you need to know (which hasn't already been leaked...) about the handset.

With the dropping of the headphone jack, it's possible that OnePlus will be rebooting its headphone line - currently the OnePlus Bullets Wireless - to make sure it offers users something branded to improve the audio quality when listening to the beats from their phone.

Android Pie in the UK

OnePlus has also confirmed that it will start rolling out the Android 9 Pie update to OnePlus 6 owners in the UK from October 10.

While not confirmed, we expect the OnePlus 6T to launch with Android Pie on October 30 seeing as the firm now has a build of the latest Google software that it's happy to push out to owners.