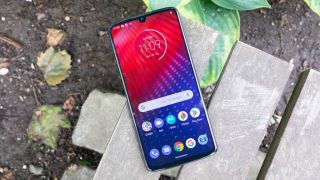 The Moto Z4 (above) isn't quite a flagship, but the Motorola Edge Plus might be (Image credit: Future)

In recent years Motorola has largely stayed away from the high-end, instead releasing the likes of the affordable Moto G8 Plus and the upper mid-range Moto Z4. Even the expensive and foldable Motorola Razr 2019 doesn’t have high-end power, but an upcoming Motorola phone might.

According to @evleaks (a leaker with a great track record), the company is working on a phone called the Motorola Edge Plus.

Other than the name, the only information he shares is that it has a punch-hole camera and that it will be coming to Verizon, though it’s not clear at this stage whether it will arrive on other networks too or be a Verizon exclusive.

So what makes us think it’s a flagship? Well, we already know that Motorola is working on or at least considering a high-end phone, one that sits outside of its E, G, One and Z ranges, so this name would line up with that.

Having said that, the news that Motorola was potentially working on a flagship landed before the company announced the Motorola Razr 2019, so that might actually have been the device the company was referring to.

But as noted above, that doesn’t actually have what we’d consider flagship specs, and it’s also a niche device, whereas we tend to think of flagships as not just powerful but also packing fairly mainstream appeal.

The Motorola Edge Plus name also sounds suitably high-end, with the ‘edge’ element perhaps referring to a curved screen, and the ‘plus’ bit suggesting additional size or power – though it’s not clear whether there would also be a Motorola Edge without the Plus suffix.

While details are light, we’re now entering flagship season, with the Samsung Galaxy S20 range set to land on February 11 and plenty more phones likely to land at MWC 2020 in late February, so the Motorola Edge Plus might be among them.

For now, our main hope is simply that it’s not totally exclusive to Verizon, as if it really is a flagship we’d quite like to be able to buy it outside the US.