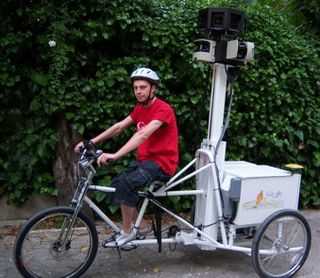 The latest expansion of Google Street Maps UK is being developed in association with agency VisitBritain, to map and photograph all of Britain's many points of interest including historic castles, sports stadia, sites of outstanding natural beauty and other stuff of interest to tourists and ramblers alike.

You can see from the picture of the Google Street View Trike that the same 3D camera tech seen on Google's controversial Street View cars has been fitted to an off-road pedal-powered bike.

TechRadar only hopes that the cyclists employed by Google are fit as fiddles – particularly if they provoke the ire of any angry locals, as happened with one Google Street View car earlier this year!

Google has said in a statement: "Due to operational factors such as light levels and the weather… the trike will only be in the UK for a limited time during the summer."

Blimey, that cyclist had better be fast then!