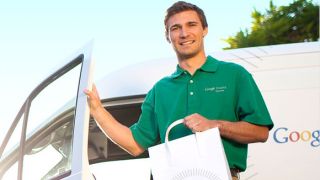 They won't send this hunk to your door, but Google Shopping might improve in other ways

Google is reportedly looking to amp up its Google Shopping efforts with the addition of a "buy now" button.

That's according to the Wall Street Journal, which says Google wants to "more directly challenge Amazon" with Google Shopping.

Sources told the site that Google has been chatting up retailers about including the "buy" button in its Google Shopping search results rather than redirecting users to retailers' own websites.

Google letting shoppers buy directly where they're already searching may indeed be a good idea - though it's unclear how Google might be trying to sell that to retailers.

One incentive might be a marketing program that would let Google's partner merchants advertise two-day shipping for goods bought through Google Shopping, but so far retailers are reportedly not hot on this idea overall.