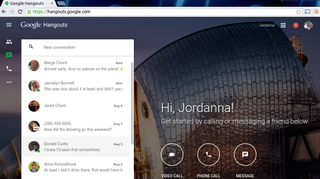 Google has today announced that Google Hangouts now has its very own website, meaning you no longer need to go through Google+ or Gmail to start chatting.

The new website lets you sign in directly to Hangouts - found at hangouts.google.com/ - and lets you see your contacts and your older conversations.

It also has three large buttons for video calls, phone calls or sending messages, and of course if you do use Google's other services, you can access them through the Hangouts website too.

"From our new site you'll be able to take advantage of the best of Hangouts in the browser, along with an inspiring image to get you through the day," said Jordanna Chord, manager of the Hangouts growth team, on a Google+ post.

Google has been slowly revamping all its Hangouts services, with updates to its Hangouts app last week hitting Android, while iOS saw an update a month ago.

The new website for Hangouts also takes on Facebook's Messenger service, which is also now a standalone app that doesn't require a Facebook account and is accessible through an app and the web.