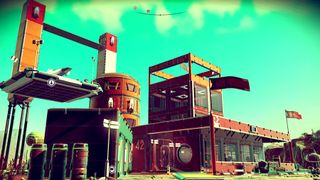 Hello Games dropped a massive No Man's Sky update out of (almost) nowhere over the weekend, and if you're wondering what the update includes then you've come to the right place. The short answer is: rather a lot.

"If you could have lived our lives over the last months, you'd know how meaningful this is," game creator Sean Murray tweeted out, later thanking the gamers who've stuck with the space exploration adventure despite a lot of users feeling rather let down.

The Foundation Update is available now for the PlayStation 4 and PC, and Hello Games is promising it's the first of many. You can read about every little tweak in the official post, but here are the major talking points.

Alongside the original way of playing the game - now known as "Normal Mode" - there are two more modes to explore, "Creative" and "Survival". Creative Mode is for all those world builders out there, because you can freely explore without any limits on skills, health or resources. You won't 'unlock' any of the game's achievements though.

Survival Mode puts the emphasis on staying alive: your resources are more limited, environments are more hazardous, and enemies are more aggressive. If you've found No Man's Sky too pedestrian and boring so far, this is for you.

Judging by the demo video above it looks as though you'll be able to advance through each mode separately, so you can run games alongside each other, although we've not yet had chance to test out the features in the Foundation Update for ourselves.

Base building and freighters

The Foundation Update also includes base building tools, so you can set up a home camp, save its position in the galaxy, and jump back to it whenever you like. Hello Games says you'll be able to up sticks and move somewhere else pretty easily too.

It looks a lot like 'Minecraft in space', with simple blocky shapes the main way of expanding your base. You can set up your own decor style in there, build a farm to produce resources naturally, and even enlist the help of aliens to research new technologies for you.

Then there are interstellar freighters - you can purchase these at "great expense" and use them to store all your resources and goods as you jump between star systems. As with bases, you can tweak the interior layouts and hire alien lifeforms to work on board.

There are a host of other tweaks: safe points, automated mining tools, a clearer interface, a faster inventory management system, better anti-aliasing effects when you're traveling at speed, and the removal of a few bugs for good measure.

The game's overriding algorithms have been adjusted too, so planets should appear more interesting and lush more often, and you'll have to spend less time trekking across rather dull landscapes. Overall, No Man's Sky should be a much more interesting proposition.

We should note that some of the smaller updates vary between PC and PlayStation 4, though the big upgrades are present and correct on both platforms. We'll have to wait and see what else Hello Games has in the pipeline as it looks to win back gamers.