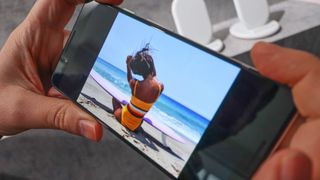 The Google Pixel 2 was one of the first smartphones to support electronic SIMs, so nobody was surprised when the Google Pixel 3 and Pixel 3 XL came with it. Now, Google has announced that even more carriers will support eSIM functionality in its phones.

You’ll be able to buy Pixel 3 units with eSIM equipped from additional carriers in several markets in the coming months.

These include: Deutsche Telekom and Vodafone in Germany, Sprint in the US, EE in the UK, Airtel and Reliance Jio in India, and Truphone and Gigsky in other countries.

That’s not all: Google is also creating a program to allow Android device makers to build their own eSIM-supporting smartphones. Crucially, this could extend to other devices, as Google ended its blog saying: “We look forward to continuing our work with our partners on the potential benefits of eSIM — whether that’s getting you connected to a phone, watch, tablet, or laptop — in the future.”

Given that we’re expecting eSIM support to extend to Chromebooks in the future, it wouldn’t be a surprise that Google may plan to extend its eSIM program to other non-Android devices.